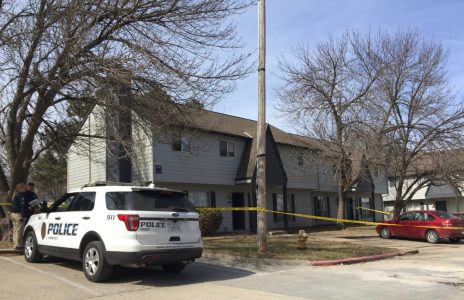 In this Journal-World file photo from March 2018, Lawrence police investigate an incident at an apartment on Graystone Drive.

A Lawrence woman has been charged with multiple felonies after an alleged altercation while cooking.

Roslyn Michelle Colum, 37, was arrested the evening of Friday, Nov. 8, at Lawrence’s Graystone Apartments, in the 500 block of Graystone Drive.

Colum was charged this week in Douglas County District Court with three counts of aggravated battery and criminal damage to property, a misdemeanor, in connection with the incident.

The charging document alleges that she caused bodily harm to the same victim with deadly weapons, including a frying pan, a knife, and “throwing boiling water on her.” The criminal damage count alleges that Colum caused less than $1,000 of damage to the woman’s shirt, frying pan and door.

Compton said one woman had been taken to the hospital with minor injuries from hot water.

Colum was held without bond over the three-day weekend, jail records indicate. On Tuesday, the judge set Colum’s bond at $18,500 own recognizance and granted her release with pretrial monitoring, the jail records show.

Colum’s next court appearance is set for Nov. 19.