Investigation still underway in shooting that injured 3 at Playerz; person who says she was tending bar describes fear 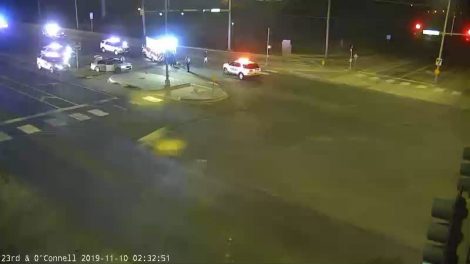 This image from a city traffic camera shows Lawrence police surrounding a car at 23rd Street and O'Connell Road at 2:32 a.m. Sunday, Nov. 10, 2019, after a shooting was reported.

After a shooting injured two victims and a suspect early Sunday, Lawrence police had released little information by Monday afternoon; however, various people associated with the bar spoke out on social media about the violent incident.

Police were dispatched to Playerz Sports Bar, 1910 Haskell Ave., around 2 a.m. Sunday after the shooting in the bar’s parking lot. A man and a woman were both injured, and a male suspect reportedly fled the area in his vehicle.

“Once we have a more clear picture of what transpired, we will be better prepared to offer more details,” Lawrence Police Department spokesman Patrick Compton said via email Monday. “Unfortunately at this time, any specifics about the circumstances surrounding this incident would be speculation.”

Compton said Monday that the male victim in the incident had been released from the hospital. He said the female victim was still hospitalized with injuries that were serious but not life-threatening.

The suspect in the shooting was reported to have suffered the most serious injuries. Officers discovered the suspect in his car at 23rd Street and O’Connell Road with life-threatening injuries from a gunshot wound, police said previously.

An air ambulance responded to the area and took the man in critical condition to the University of Kansas hospital in Kansas City, Kan., around 2:40 a.m. Sunday, the Journal-World reported. Compton said Monday afternoon that the man remained in the hospital with life-threatening injuries.

Compton said police could not yet release the names and ages of the victims or the suspect.

One woman posted in a popular Lawrence Facebook group that she had been bartending at the time of the shooting and that the suspect wasn’t a patron of Playerz. She said everyone at the bar was having a good time that night, and no arguments had occurred inside the bar.

“The people there tried to de escalate the situation and ended up being victims,” the woman wrote. “We can not handle what happens in the parking lot at all.”

She described ducking behind the bar for safety when she heard the gunshots.

“I wish that fear upon nobody,” she wrote.

The Journal-World has reported on multiple violent incidents, including two shootings, at Playerz in the past few years. The bartender wrote that she’s “Sick and tired of the bar being blamed.”

The Journal-World left a message for the co-owners of the bar, Michelle Seidner and April Oakes, but did not hear back Monday. The bar owners did post to Facebook about the incident early Sunday morning, however.

“There are many unanswered questions about why this type of violence continues to happen in our community,” the owners wrote. “We don’t often know what to say to our family but what we do know is that we always come together to support each other. It is time to band together so we can lift each other up and support each other while we all try to make sense of this world. We are sending love to everyone involved – the victims, our staff, and all of the other patrons that were there and had to experience what was probably the scariest event of their lives.”

In 2016, Seidner told the Journal-World that she and Oakes knew that the bar came with a certain reputation. Prior to 2012, the facility was home to Crosstown Tavern, which was the site of several stabbings; an 18-year-old Lawrence man had also been nearly beaten to death there in 1997.

“Our No. 1 goal was to try to change that (reputation), to get people in all of Lawrence to understand we’re something different,” Seidner said in 2016.

The Journal-World’s attempts Monday to reach family members and friends of those injured in the shooting were either unsuccessful or the people did not yet want to comment for the newspaper.