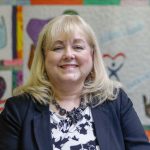 Sleepless nights — mulling reports on abused and neglected children she’s tasked with helping — have been part of the job for Diana Frederick.

Some of the children have seen their mothers seriously injured by a partner, or seen their pets abused. Some have cigarette burns left on purpose, or marks from being beaten. Some have never even had a birthday cake.

But it’s not just the “heartbreaking” stories, it’s also the growing numbers of them. Douglas County’s child in need of care cases have doubled in the past 10 years.

“You can hardly even tread water, it feels like,” Frederick said. “As quickly as we can get volunteers assigned to kids, then there are more kids coming into the system.”

Frederick is retiring next month after 11 years as executive director of Douglas County CASA, or Court Appointed Special Advocates. She’s doubled the size and budget of the nonprofit organization but says it’s still not enough, and even more volunteers and money will be needed going forward to keep up with increasing demand.

Douglas County District Court Judge Peggy Kittel commended Frederick’s “undying optimism” in advocating for children caught in the foster care system and for the ambitious goal of providing each child a CASA volunteer.

“Having been involved in child in need of care cases for a majority of my career, I can attest to the difference CASAs make in improving the lives of children who are court involved,” Kittel said, in a news release. “We have been fortunate to have a strong CASA program in our county, thanks to Diana.”

Frederick was coordinator of volunteers and director of development for the University of Kansas Audio-Reader Network before taking the reins at CASA in 2008.

When she started, CASA had a cozy office on the second floor of the courthouse, she said. Its staff comprised her and four roughly half-time staffers. There were 46 volunteer advocates, and 66 kids in the court system had a CASA assigned to their case.

Now, the CASA office fills a two-story space half a block from the courthouse. It’s filled with offices, a training room, a few small play spaces for kids and storage — for files as well as toys and other necessary items for the kids.

There are seven staffers, two full-time including Frederick and the rest part-time, though with more hours. Last year, there were 80 active volunteer advocates. A total of 157 children in the system, which includes children with cases filed in previous years, had a CASA.

Yet there are still not enough CASAs to go around.

At any given time, there may be roughly 80 children on the waiting list to have a CASA assigned to their case, Frederick said. With input from judges and caseworkers, the organization must choose which children’s cases to prioritize.

“It is just absolutely heartbreaking, but it really reflects back to the increased number of kids in foster care,” Frederick said. “It’s not unique, sadly, to our CASA program; it’s a struggle for CASAs all over the country.”

When a child is taken into protective custody because of abuse or neglect, the court begins child in need of care proceedings, beginning with foster home placement, Frederick explained.

“The ultimate goal is to get a child to a safe, permanent home,” Frederick said. “It means different things for different kids.”

If parents follow court orders and rehabilitate, the children may be returned to them, she said. Other times, parental rights are terminated and the children are adopted by other families. Sometimes, though Frederick doesn’t like to see it, children age out of the foster care system without a permanent home.

A CASA volunteer is assigned to a child or a sibling group to advocate for them throughout that court process.

The idea is that the CASA will be a constant for children, even as they may move through multiple foster homes, schools, lawyers or overloaded caseworkers.

The CASA spends time with the children regularly, in their foster home, public places or the CASA office, Frederick said. They may take the child to the library, to swimming lessons, to the park or meet up to play games. She recalled one CASA who taught a girl to sew, taking a portable sewing machine to the southeast Kansas town where the girl was placed in foster care, and setting it up inside the library for a series of lessons.

CASAs network with court stakeholders, including lawyers, judges and caseworkers. They also investigate — acting as “eyes and ears for the judge,” Frederick said — and make recommendations on what would be in the child’s best interests. Conveying the child’s wishes, too, is part of the CASA’s role, Frederick said.

CASA is not the kind of volunteer organization where hundreds of people show up, work for an hour or two and go home.

The organization asks for a commitment of at least one year from its volunteers, who undergo 30 hours of training before being sworn in as CASAs.

“You want people with emotional fortitude but at the same time you want them to be compassionate,” Frederick said of the ideal volunteer.

Frederick said that the average length of a child in need of care case is two or three years, but that some take significantly longer.

“We’ve had some go eight years,” she said. “Miraculously, we’ve had CASAs stay that long.”

The organization also accepts donations and raises money to provide its kids with holiday gifts, Halloween costumes so they’re not the only kid in class who doesn’t have one, or tuition for activities such as summer camps.

When she started with CASA, Frederick said most kids the organization helped were teens. But she said CASA is helping increasingly more babies and toddlers.

Frederick said she believes cuts to social services for parents — particularly, drug-addicted and mentally ill parents — is to blame for that and for the increased caseload. She said methamphetamine addiction is prevalent here.

Even more so than older children, babies and toddlers are entirely dependent on those parents, she said, “and parents who are abusing drugs are not very good parents.”

Child in need of care cases have climbed steadily in the past decade, according to numbers provided by the Douglas County District Attorney’s Office.

Fundraising is critical for CASA to keep up, and it’s hard, Frederick said.

Interviewed last week during a break from working on a grant application, Frederick joked that people run when they see her coming, figuring she’s going to ask them for money.

Because of confidentiality, CASA also isn’t the kind of organization that can use heartwarming photos of the children it helps, or details about specific children’s difficult situations, in its marketing.

“We are so limited in what we can share, but I swear if people could see their faces …” Frederick said.

Slogging through paperwork and sad stories can be difficult, Frederick said.

But she tears up when she describes the kind of feedback that has kept her going — the kind that comes from the kids themselves.

“The thing that I think really continues to surprise me is how resilient these kids are,” she said.

She said that after letting some time pass, she intends to find places to volunteer in the community herself.

To learn more about Douglas County CASA, donate or apply to be a volunteer advocate, go online to dccasa.org. The next CASA volunteer training sessions begin in June, and applications are suggested to be in by the first week of the month.