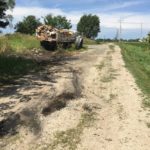 A charred spot along N. 1650 Road, just east of the Lawrence city limit, is pictured Monday, July 3, 2017. The previous night, a Douglas County sheriff's deputy discovered a body inside a burning vehicle that apparently had left the roadway and collided with a parked truck.

Approaching two years since their 15-year-old son was killed in a fiery crash, a Lawrence couple say they’re still grappling with a lack of closure surrounding his death. They’re frustrated in part because they don’t feel anyone was held accountable for the incident — some key details of which remain a mystery.

The crash that killed Dalton Hess remained under investigation for over six months but no criminal charges were ever filed.

“We’re just lost,” said Kenneth Hess, who said he and his wife, Elizabeth Shelby, are still hearing questions and rumors about suspected foul play from their son’s friends and their parents.

“We’ve exhausted everything that we thought we could do.”

Authorities say their investigation was thorough and revealed no foul play.

“It appears to be a horrific accident, based upon the evidence and information that we have,” Douglas County District Attorney Charles Branson said.

However, Branson said he could never confirm which of the two boys in the car was driving when it crashed, making it impossible to file criminal driving charges even if they were warranted. The teen who survived, claiming amnesia, failed to answer for authorities the question of who was driving.

A Douglas County Sheriff’s Office lieutenant on routine patrol came upon the wreck about 9:15 p.m. July 2, 2017, just northeast of Lawrence.

After seeing smoke from over half a mile away, the veteran deputy drove toward the source and found it in the 1600 block of North 1650 Road: a car, fully engulfed in flames, which had crashed into an old farm truck parked just off the roadway, according to the sheriff’s accident report.

After firefighters extinguished the blaze, Dalton’s body was found inside the car.

The car’s sole other occupant, a 16-year-old boy who also had no driver’s license, was found near the crash and taken by ambulance to the University of Kansas Hospital in Kansas City, Kan.

Kenneth Hess said he and his wife question whether the sheriff’s office followed protocol in its response and investigation of the crash, including why the deputy didn’t try to put out the fire himself in case Dalton could have been saved.

Hess said they also believe Dalton’s friend was the one driving, so they’re frustrated that he wasn’t charged with crimes.

Hess said he’s asked multiple civil attorneys to file a wrongful death lawsuit but that none agreed to take on the case. Following those rejections, he said he filed a complaint with the Kansas Bureau of Investigation in recent weeks. 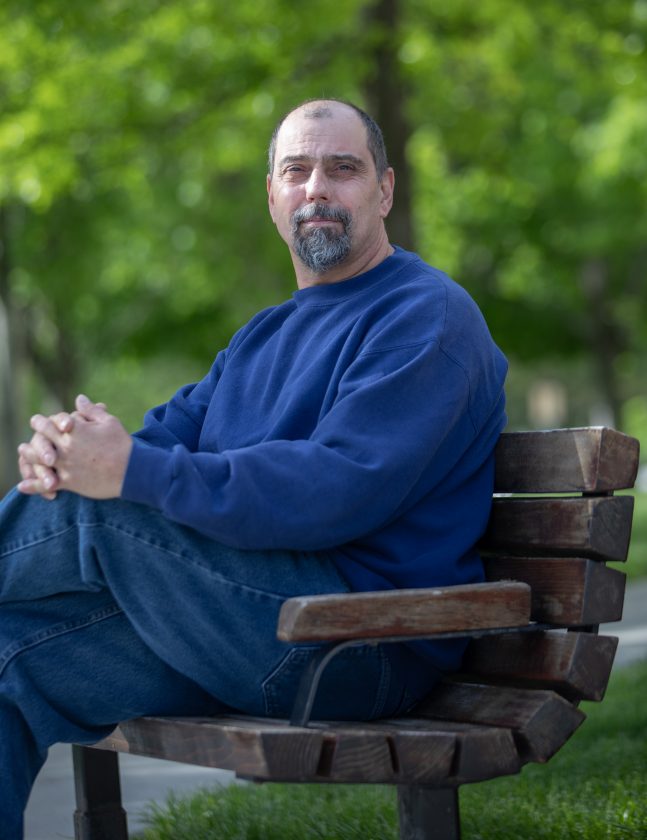 Kenneth Hess, of Lawrence, is still searching for answers regarding the death of his son, Dalton Hess, in a car crash in July 2017.

A KBI spokeswoman confirmed receiving Hess’ complaint alleging the case was mishandled by the sheriff’s office, but said the agency was not investigating it.

“While we do receive a number of calls and emails like these, unlike local law enforcement, the KBI does not conduct investigations based solely on citizen reports or referrals,” Melissa Underwood said, in an email.

“We only investigate allegations of criminal activity and this allegation was not criminal.”

Dalton, who would have been a junior at Free State High School, died just a few weeks before he turned 16.

His parents had bought a 2006 Hyundai Sonata they intended to give Dalton for his birthday, Shelby previously told the Journal-World.

The afternoon of the crash, Shelby said she allowed Dalton and his friend to use the car after dropping her off at work as a home caregiver in Eudora, with the agreement they would pick her up at the end of her shift that evening.

Hess said they last heard from Dalton about 7:30 p.m., asking how to get to Eudora from rural roads outside North Lawrence, but couldn’t get him to answer his phone after that.

Hess said they later learned the teens had gotten a flat tire while in Eudora and that someone had helped them put on the spare, so there was a “donut” on one of the front wheels when the car crashed.

Hess said investigators told him they estimated the car was driving 55 miles per hour on the gravel road when it collided with the truck — though Hess said he doesn’t think the Hyundai could have reached that speed with a donut on gravel.

The location of the crash is on an unmaintained dead-end section of gravel road just east of East 1600 Road.

After the crash, skid marks leading to a patch of charred grass and ash behind the parked farm truck were visible in the gravel road, a reporter observed the next morning.

The sheriff’s accident report said the car was traveling west — coming from the direction of the dead-end — when it lost control, drifting off the road first to the north then to the south before striking the truck.

The car was consumed by fire to the point that the deputy who found it could not tell what kind of vehicle it was when he arrived, according to the sheriff’s report. He estimated the crash occurred about 20 minutes before he got to it. The deputy radioed for firefighters, and Lawrence-Douglas County Fire Medical crews responded to the scene and put the fire out. 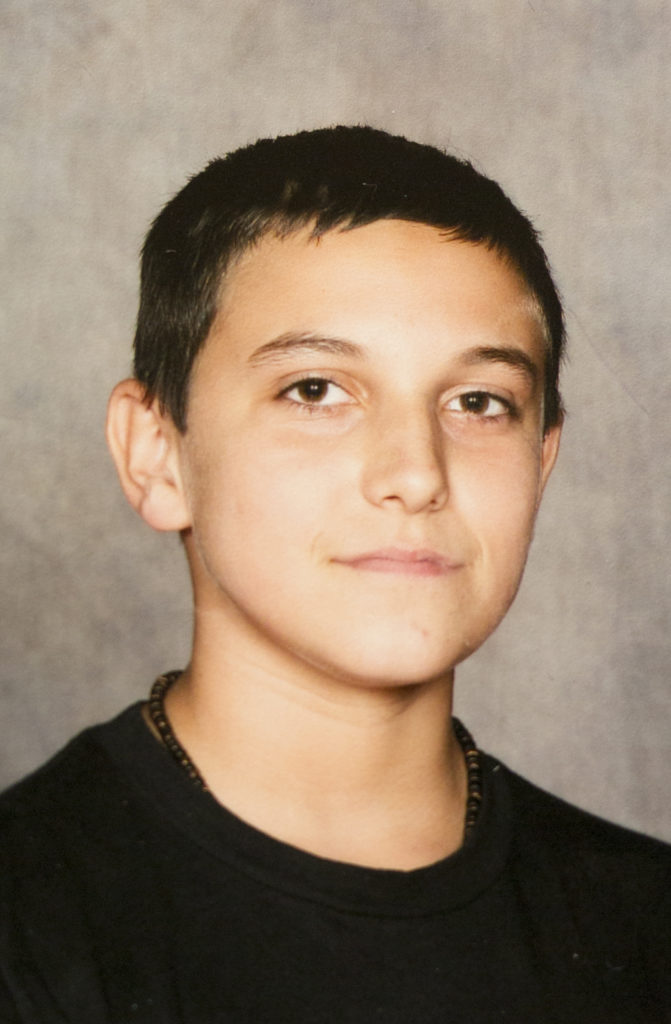 Hess said Dalton’s body was found in the backseat of the car, where investigators told him it was likely flung by the crash impact and recoil, especially if he wasn’t wearing a seat belt — though Hess said he doesn’t believe that’s possible, either. He thinks Dalton would have been thrown from the car.

Dalton died as a result of the crash followed by the fire, then-coroner Erik Mitchell ruled.

His body — extensively burned — had a fractured skull, multiple rib fractures and internal bleeding in the chest cavity, plus additional fracturing caused by heat, Mitchell wrote in his autopsy report. There was soot in his airway, indicating he was still breathing when the fire started, according to the report.

Dalton’s friend was found near the crash scene, according to the sheriff’s report.

The ambulance was called and arrived at the scene about an hour and a half after the crash, and apparently departed quickly after picking the boy up, arriving at KU Hospital about 45 minutes later, according to the sheriff’s report.

Branson confirmed it was over an hour before the surviving teen was found. Branson said that the teen “appeared confused” but that he could not provide details on his injuries.

Both boys had ingested drugs prior to the crash.

Dalton had marijuana and amphetamines in his system, according to the autopsy report. The report doesn’t specify what type of amphetamines — a drug category that includes prescription ADHD medication, as well as methamphetamine — were present.

The other boy tested positive for illegal drugs, according to Kansas Bureau of Investigation lab results cited in the sheriff’s report. The report doesn’t indicate what type of drugs were detected.

At the time of the crash, the surviving teen had outstanding arrest warrants for failing to follow court orders in two juvenile criminal cases pending against him, according to Douglas County District Court records.

The warrants were recalled the day after the crash, when the boy would have been in the hospital.

At his next court hearing a month later, the teen was placed on house arrest in those cases, but within days he was caught possessing marijuana with intent to distribute it, picked up a new felony case and had his house arrest revoked, court records show.

He’d been in the juvenile system for years, and ordered to various therapies and monitoring, including inpatient substance abuse treatment, according to court records.

The three cases were closed with a plea deal in late 2017, court records indicate. The teen was released from his resulting sentence in late 2018.

The sheriff’s public accident report identified the other teen, not Dalton, as the driver.

However, Branson said that after reviewing all the sheriff’s office investigatory reports, his office was unable to determine who was actually driving the car at the time of the crash.

“The survivor of the crash … doesn’t appear to have a recollection of the events leading up to the crash or immediately after the crash, after several interviews,” Branson said. “There was information that during the day both individuals had been driving the car. There were also indications during the day that the car was being driven in a fast or reckless manner, and that there might have been some skid stops by pulling the emergency brake.”

Without evidence to prove who was at the wheel, Branson said his office can’t file criminal charges.

“There’s no way that I can prove beyond a reasonable doubt who was driving that car at the time of the crash,” Branson said. “We just don’t know.”

Sgt. Kristen Channel of the sheriff’s office said, via email, the agency did follow protocol at the scene and during the course of the investigation.

She said the office interviewed several people during the course of its investigation and determined that no one else was in the vehicle with the two boys when it crashed, nor had any involvement with the crash.

At one point soon after the crash, the sheriff’s office said they were looking for the driver of a red pickup who may have been involved in a “verbal altercation” with the boys in the Hyundai at some point in the hours before the crash, the Journal-World previously reported. The office said later they’d hoped that person could help establish a timeline of the boys’ activities before the crash but didn’t think he had anything to do with the accident.

Channel said deputies do carry fire extinguishers in their patrol cars which “can be and are often used in cases of small fires.” However, deputies don’t get firefighting training, she said.

The sheriff’s office is done investigating unless something new surfaces. 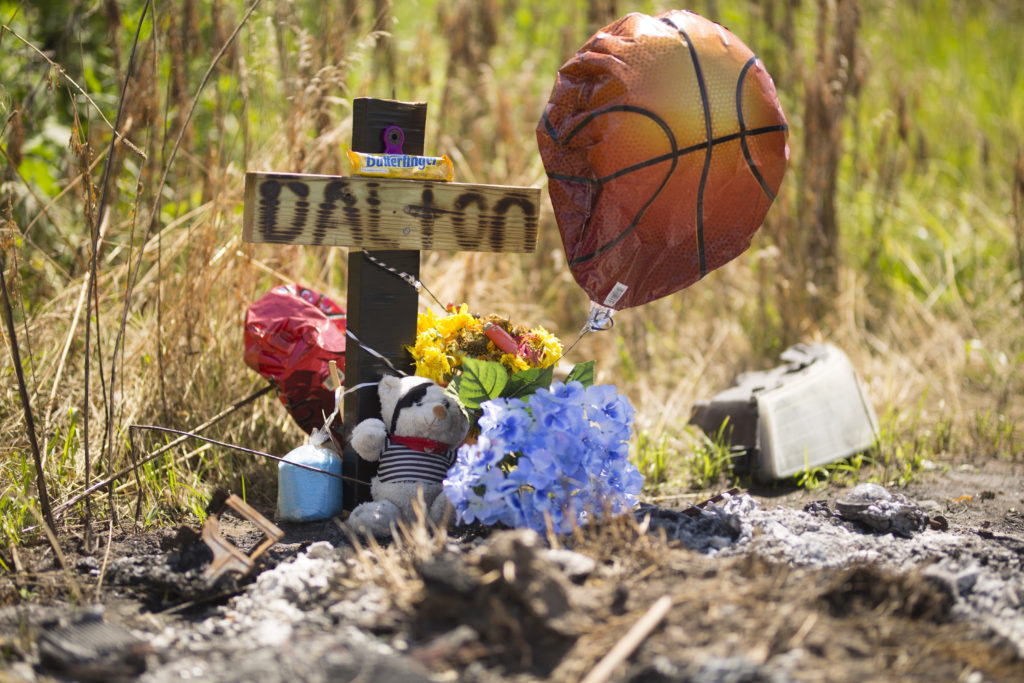 A memorial for Dalton Hess, pictured in July 2017, sits at the side of the road in the 1600 block of North 1650 Road just northeast of Lawrence.