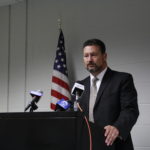 Thousands of old Douglas County arrest warrants are poised to be erased in a special sweep by the district attorney’s office.

District Attorney Charles Branson announced Wednesday that he filed a motion for a court order to purge 2,433 warrants in old criminal and traffic cases. He said the original offenses ranged from a decade to over 30 years old, and most were “minor misdemeanor offenses or failure to appear cases.”

The warrants are against people who have not been involved with the criminal justice system for a long time, Branson said in his news release. He said such warrants also may block defendants’ paths to success in life.

“Recalling the warrants and closing the associated cases, which generally could not be successfully prosecuted due to the passage of time, removes a steep barrier to employment opportunities, housing, and a variety of other collateral consequences for hundreds of Douglas County citizens,” Branson said, in the news release. “These cases clog the criminal justice system and require valuable time and expense to maintain. Those resources can now be used on more pressing cases and investigations.”

Branson’s announcement was in conjunction with Law Day, observed annually on May 1 by the American Bar Association as a day “to celebrate the rule of law” and opportunity to “understand how law and the legal process protect our liberty, strive to achieve justice, and contribute to the freedoms that all Americans share.”

According to the DA’s news release, the office’s current practice is to review case files every few years and to purge old cases.

“Serious cases are generally never closed, but if a serious case comes up for warrant review, it would only be closed after a thorough case review was completed and a determination was made that the case could no longer proceed,” Branson said.

He said that when cases were closed the related warrants were recalled and removed from local and national law enforcement databases.