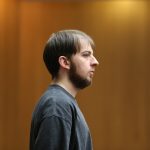 Johnie L. Saluto appears at a hearing in Douglas County District Court on Tuesday, May 28, 2019.

Confronted after the girl told someone about the abuse, a Lawrence man admitted that he sexually abused and showed pornography to a young girl he babysat over a period of years, according to a police affidavit.

Within days of his police interview in May, Johnie L. Saluto, 30, was arrested and charged with a string of so-called Jessica’s Law crimes, punishable by up to life in prison, plus other counts.

Saluto is charged with four counts of aggravated indecent liberties with a child, each count an off-grid level felony, according to the complaint filed in Douglas County District Court. He’s also charged with two felony counts of lewd and lascivious behavior and one misdemeanor count of promoting obscenity to a minor.

The alleged abuse dates back to 2015, when the child was 4, and continued into this year, according to the complaint.

The Journal-World requested the affidavit in support of Saluto’s arrest and received it from the court late Monday. According to the document, prepared by Lawrence Police Department investigators:

In May the girl disclosed the abuse to someone — it’s unclear who, because the document is partially redacted — who then told her parents.

A few days later, police executed a search warrant at Saluto’s home and interviewed him.

“Approximately one hour into the interview, Johnie leaned forward on the table and stated ‘Ok I have done it,'” police wrote in the affidavit.

His description of specific acts that occurred over a number of years when he was alone with the girl at his home and at her home were in keeping with her account. He told police that once when the girl was 4 or 5 he removed her underwear but never touched her in that area.

Police seized electronic devices and biological evidence from Saluto’s home and planned to send them to crime labs for analysis, according to the affidavit.

Saluto remains jailed on $500,000 bond. His case is proceeding before Judge Kay Huff.