KCMO man is 5th sent to prison for 2017 home-invasion robbery, shooting in Lawrence 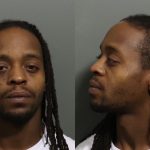 The last defendant in a group of people who robbed and shot a Lawrence man in his apartment on December 2017 is headed to prison.

Though he wasn’t accused of pulling the trigger, Michael R. Smith, 28, of Kansas City, Mo., was one of five people who barged into the apartment to rob the 21-year-old man.

Smith was sentenced Friday to 26 months, or just over two years, in prison followed by a year of post-release supervision, according to the Douglas County District Attorney’s Office. He also must pay close to $6,000 in restitution, split among his co-defendants.

Following a plea agreement, Smith’s original charges were reduced to one count of attempted robbery, a felony, to which he pleaded no contest in April, according to the DA’s office. He had been charged with aggravated robbery while armed with a handgun as well as aggravated battery.

The victim told police that he’d been at home with his girlfriend and answered a knock at the door. Someone said “run that (expletive)” and a group of suspects with handguns barged in, some holding him and his girlfriend downstairs while others searched upstairs.

The victim was flown to an area hospital, but survived. Prosecutors said in previous court hearings that the bullet remains lodged in his body.

The robber who shot the victim was identified as Lawrence resident Kayshunna C. Poindexter, aka “Tink.” She was sentenced in October. Brian L. Smith, of Kansas City, Mo., Jermel Fleming, of Grandview, Mo., and Brian L. Proctor, of Lawrence, also have been sentenced to prison for the robbery.