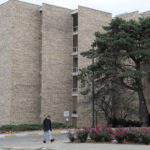 The Jayhawker Towers on the University of Kansas campus are pictured on Thursday, Nov. 9, 2010.

The University of Kansas is paying a former student-athlete $40,000 to settle her lawsuit against the school, in which she claimed mold in vents to her dorm room made her sick.

Though the university still denies her claims, it will pay Laine R. Evans $20,000 and her attorneys $20,000 to settle the suit without going to trial, according to an agreement obtained by the Journal-World through a Kansas Open Records Act request. The university released the document Tuesday.

“Ms. Evans and the University voluntarily participated in mediation and have agreed that in order to avoid the expense and uncertainty of litigation in this matter it is in their mutual interests to resolve their disputes,” the agreement says.

In exchange, Evans agreed to dismiss the lawsuit with prejudice — meaning it can’t be refiled — with each side bearing its own costs.

Evans was a freshman on the KU golf team during the 2015-16 school year. After that year, she transferred and joined the golf team at Wichita State University.

She filed the lawsuit in early 2018, accusing KU of failing to make the on-campus apartment building where she lived safe for housing.

The suit alleged that throughout September and October of 2015, while she lived in KU’s Jayhawker Towers, Evans “became increasingly ill.” The suit said she developed persistent sinus and upper respiratory symptoms, night sweats, fatigue and nausea, and that, because of the ongoing symptoms, she had her tonsils removed when she went home to Wichita for Christmas break.

“Unfortunately, the symptoms returned as soon as she went back to the Jayhawk (sic) Towers to start her second semester,” the lawsuit says. “Upon resuming residence in the Towers she began to experience chronic upper-respiratory congestion, coughing, nausea, vomiting, headaches, muscle cramps and (chest pain.)”

In early 2016, Evans’ mother emailed a golf coach and requested that her daughter’s room be tested for mold, then asked an unnamed “family friend” to give the room “a quick inspection,” according to the suit.

The friend found what he believed to be lint in the bathroom air vent, then opened the vent to find the vent cover “caked with mold” and mold inside the air duct, as well, according to the lawsuit. A similar inspection found mold in another air vent.

A few days later, Evans got a blood test to see if she had mold allergies, and she tested positive, the lawsuit said.

In its response to the lawsuit, KU said Evans exaggerated her illnesses and denied that the university was at fault for her health problems.

Evans incurred more than $7,000 in medical bills for her mold exposure and will continue to suffer noneconomic damages, her lawsuit said. In a subsequent filing, Evans’ lawyer said her actual damages totaled $315,000.

The Journal-World reached out to university officials and Evans’ lawyers for comment on the settlement Tuesday afternoon but did not immediately receive responses.

According to a confidentiality clause in the agreement, neither side is supposed to publicly disclose its existence or its terms. An exception, the clause states, is that as a government institution KU would be required to release the document if requested under the state’s open records law.

The Journal-World requested the agreement from KU after the lawsuit was dismissed from Douglas County District Court in late May.

First opened in 1969, according to the KU buildings directory, the four-building Jayhawker Towers is located on campus at 1603 W. 15th St. Tower A — where Evans lived, according to her suit — was renovated in 2009.