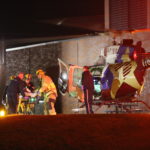 Emergency crews responded to a vehicle versus pedestrian crash on Jan. 5, 2019.

A woman who suffered life-threatening injuries after being hit by a vehicle Saturday night is now in stable condition, Lawrence police Sgt. Amy Rhoads said Wednesday in an email to the Journal-World.

The woman, 68, was crossing the street at Sixth and Michigan streets when a Chevrolet Trailblazer turned onto Sixth Street and hit her in the crosswalk, Lawrence police Officer Drew Fennelly told the Journal-World Saturday. She was flown to a Kansas City-area trauma center with life-threatening injuries.

The driver of the Trailblazer, a 45-year-old man, stayed on scene and was cooperative with police, Fennelly said Saturday night. The intersection was closed for several hours while police responded to the crash.

As of Monday, there had been no arrests made or citations issued in relation to the crash, Rhoads said via email.