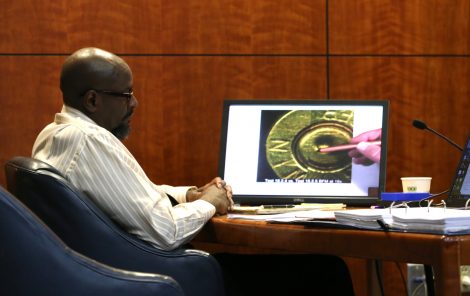 Tommy May watches on a monitor as his defense attorney, Gary Conwell, points out details in a Kansas Bureau of Investigation photo comparing bullet casings during trial on Friday, Dec. 13, 2019.

Jurors may have learned a thing or two from the series of forensic experts who testified during a trial for Tommy May on Friday.

May, 60, of Lawrence, is charged with a slew of felonies stemming from incidents prosecutors allege happened within a span of about an hour on July 2, 2018.

Prosecutors Alice Walker and David Melton have presented evidence this week to support allegations that May shot and injured a woman, Marzetta Yarbrough, in his apartment; shot and paralyzed his neighbor, Jeremy Jones, outside on the driveway of the fourplex at 713 W. 25th St.; then left the scene in his 1996 GMC Jimmy.

The prosecutors allege he then tried to flee Lawrence Police Sgt. Robert Neff; attempted to turn too fast and ended up high-centered on top of a fire hydrant at 21st and Louisiana streets; reversed into Neff’s patrol vehicle; then accelerated directly toward Neff. May then allegedly fled on foot, leaving the Jimmy about a block south at 22nd and Louisiana streets.

Forensic testing indicated that there was blood on the gun, and Mary Swab, a forensic DNA analyst for the Kansas Bureau of Investigation, said she was able to match DNA found on the gun to Yarbrough. She did not find conclusive male DNA on the gun, but she did find a partial DNA “haplotype” that could not rule out May or any of his paternal male relatives.

Swab also tested blood found in multiple locations at the fourplex: on the inside of the door to May’s apartment, on the stairs leading down to the driveway, and from the bloody trail Yarbrough left when she ran to hide in nearby bushes. All of the DNA from those blood samples matched to Yarbrough, Swab said.

Jurors heard from several other scientists throughout the day:

• John Horn, a latent print examiner for the KBI, testified that he did not find any fingerprints or ridge detail — such as a print left by a palm or other part of the hand — on the gun prosecutors allege May used, a Hi-Point C-9 9 mm semiautomatic handgun.

• Amanda Young, senior special agent for the KBI, testified that she was called to the intersection of 22nd and Louisiana streets to prepare May’s Jimmy to get it back to the KBI lab in Topeka.

The vehicle’s front windows were down and its back windshield was broken out when May reportedly backed into a trash can while leaving his apartment. Young said her job was to get the vehicle to a bay at the KBI in as close to the same condition as possible, so she did not roll its windows up. However, she could see a small baggie and a few other items on the floorboards beneath the driver’s seat. One item was a small plastic baggie with a substance that she thought might be drugs, so she collected it as evidence rather than risk it blowing out the window. She said she had the tow truck in her line of sight all the way back to Topeka.

Neff testified Thursday that he had tried to fire his gun at the Jimmy because he thought he was going to die. Once Young examined the Jimmy at the bay, she said she noted several defects that could have been caused by bullets: two through the windshield, near the driver’s seat; one near the windshield wiper on the passenger’s side; one in the middle of the hood; and several others on quarter panels of the SUV.

The plastic molding on the front of the SUV was seriously damaged. There was also damage to the bottom of the SUV, including some large dents and some paint transfer in shades of yellow and blue.

Young said she did not attempt to start the vehicle or test any of its functions. The tow truck driver needed to turn its wheels, and she said the steering wheel was functional for that purpose.

A witness had described May’s vehicle as a green Chevrolet Blazer, which Neff testified has a similar body style to a Jimmy. Young said Friday that the driver’s side door of the Jimmy actually bore a Blazer symbol and was possibly a replacement door.

• Somiyeh Zalekian, a former forensic scientist for the KBI, testified that swabs taken from May’s hands and face tested positive for gunshot residue. She said that residue indicates that someone has fired a weapon or been in the vicinity of a weapon being fired. Generally, she said KBI policy was to perform that test if the swabs were taken within 10 hours of the alleged incident. The swabs from May were taken within that timeframe.

• Amanda Gibson, another former forensic scientist for the KBI, said she had compared the two bullet casings that Lawrence police found at 713 W. 25th St. She had also performed test firings of the Hi-Point C-9 handgun. She concluded that both bullets were fired from the Hi-Point.

• Beth Royel, a forensic scientist with KBI, testified that the substance Young allegedly found in the baggie on the floorboards of the Jimmy was methamphetamine. 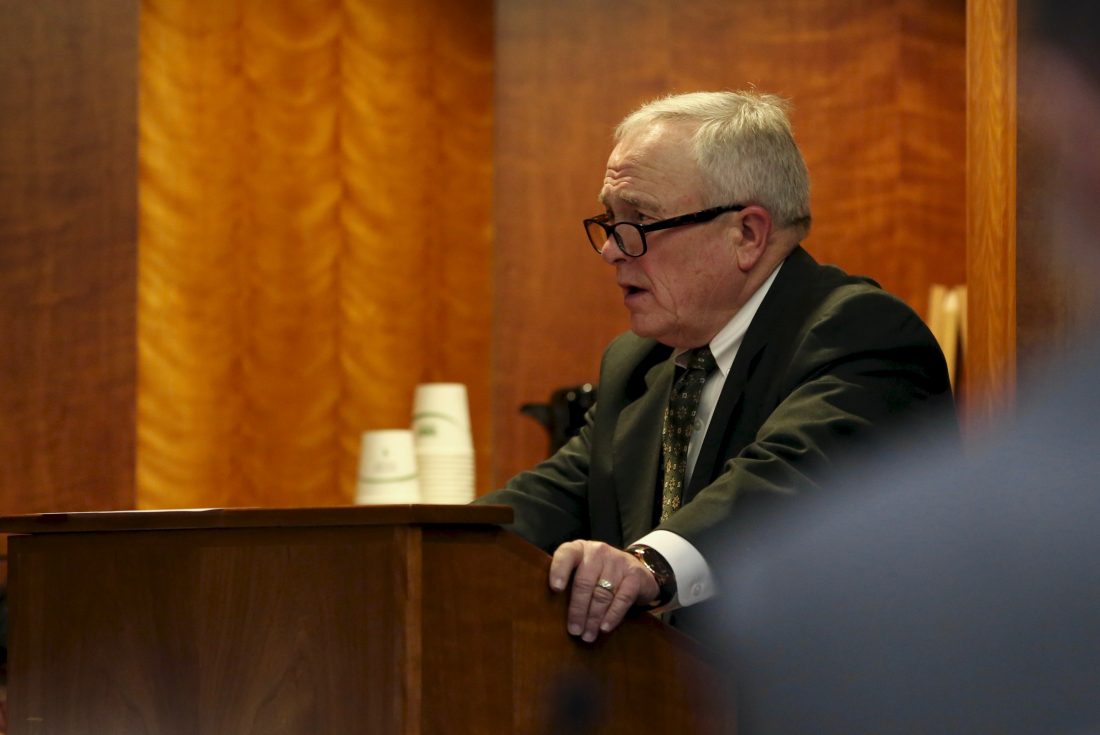 Jurors will return at 8:30 a.m. Tuesday, skipping Monday because of prior obligations of the court. Prosecutors are expected to rest their case, and defense attorney Gary Conwell said he hopes to present his opening arguments and his witnesses in time to get to closing arguments and give the case to the jury Tuesday afternoon.