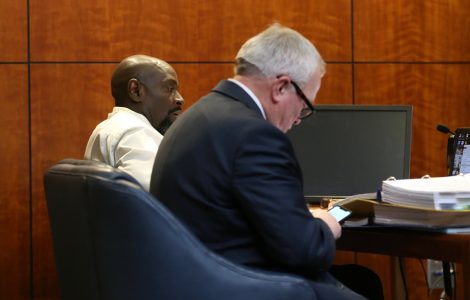 The source of that imagery is the 1996 GMC Jimmy of Tommy J. May. Neff believed it was going to kill him, he said.

May, 60, of Lawrence, is on trial this week in Douglas County District Court for allegations of crimes spanning a short window of time but multiple crime scenes. Prosecutors allege that May shot two people, injuring one and paralyzing the other, then fled the scene and, when pursued, tried to run Neff over, all on the evening of July 2, 2018.

Jurors at May’s trial Thursday saw the in-car footage from Neff’s patrol vehicle, and although not all of May’s alleged acts were captured by the stationary camera, Neff’s body microphone caught the audio.

They also heard recordings from when May was taken into custody, telling officers he couldn’t breathe.

Neff had been reading over reports from the patrol officers he supervised when dispatch summoned first responders to a double shooting at 713 W. 25th St. Dispatch also described May’s vehicle as a Chevy Blazer, which has a similar body style to a Jimmy, Neff said.

While en route, Neff said, he saw what he believed was the suspect’s vehicle at 23rd and Alabama streets. He turned around to follow it, and it then turned left to head northbound on Louisiana Street. After that turn, Neff said, May accelerated to speeds Neff estimated at roughly 60 mph. 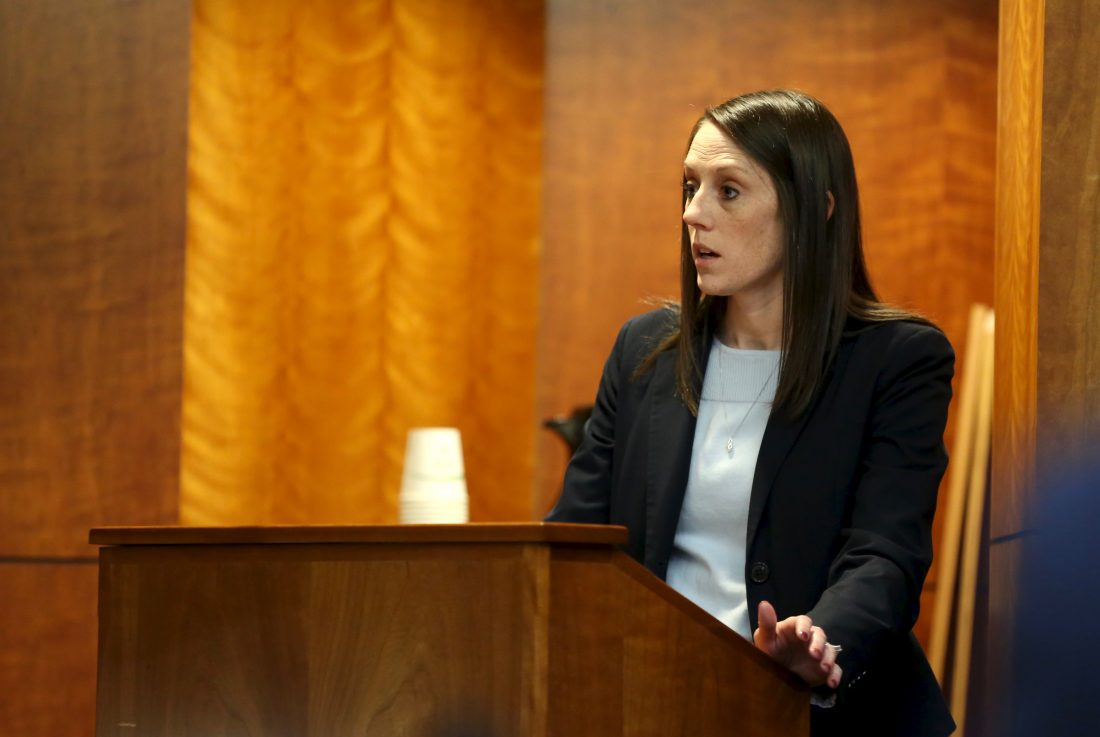 The dashcam footage shows that while heading northbound on Louisiana Street, the Jimmy attempts to make a right turn at 21st Street but instead veers northeast and crashes into a fire hydrant in someone’s yard and becomes high-centered on top of it.

Neff said at that point he debated whether to get out of his car; he said his car is cover, and the best source of protection is the engine block. He said he got out and stood next to the driver’s side with his gun drawn. Neff can be heard shouting: “Let me see your hands! Hands! Turn it off,” referring to the vehicle.

But the driver continues to put the car in reverse and then back into drive several times, attempting to rock it off of the hydrant, the video shows.

Within a matter of seconds, though, the video shows the SUV reversing — quickly — into the driver’s side of the front of Neff’s vehicle with a loud crash, then reversing onto 21st Street. Jurors could hear Neff continuing to command May to shut off his vehicle. That’s followed by screeching tires, a revving engine and several “pop” sounds back to back as Neff fires at the vehicle.

Why? “I didn’t want to get run over and die,” Neff replied to prosecutor Alice Walker’s question.

Despite firing several shots, Neff said he thought he was going under the Jimmy. But he said he “flopped” or “smashed” onto the hood, rolled off to the side and was able to avoid going under.

Neff’s left elbow was bruised and he suffered some road rash on his left arm, but he said his body ended up being OK. In fact, he said he was able to pop up and chase after May’s vehicle on foot, continuing to fire until his magazine jammed and he had to reload. 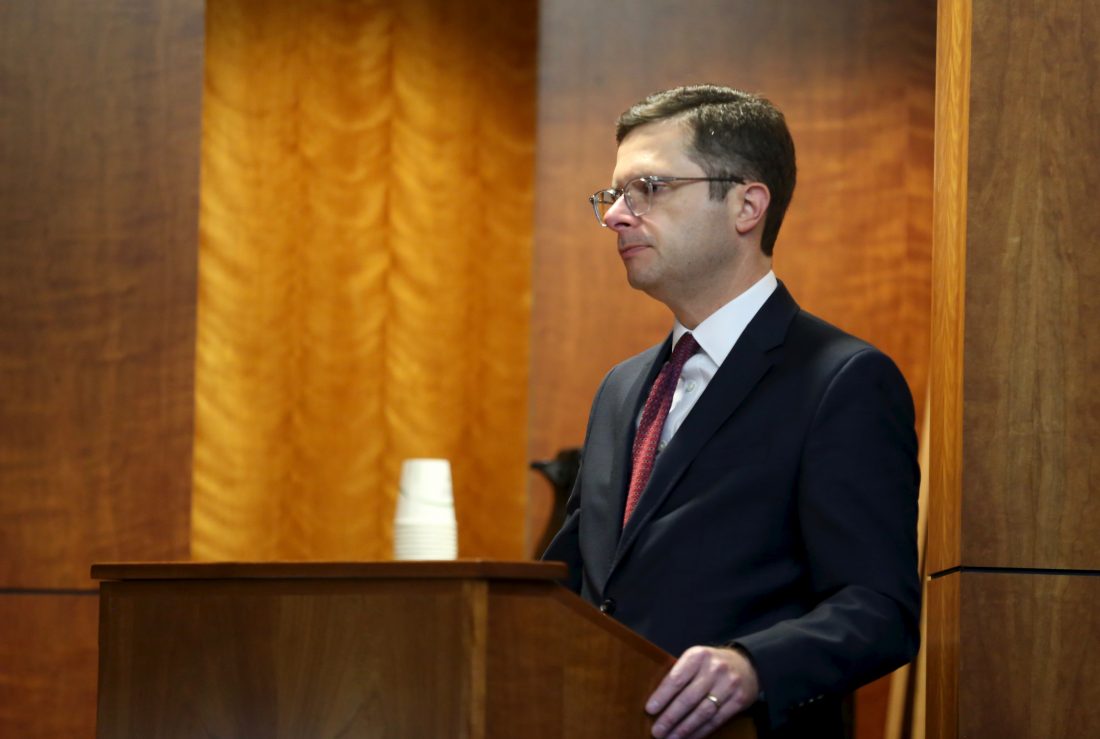 At the time, Neff said, he actually felt pretty good from the adrenaline, and it wasn’t until after the incident that he realized he needed to check himself because “I didn’t know if I had all my pieces and parts,” he said.

Conwell asked the sergeant about putting himself in a “precarious situation.”

“I didn’t put myself in that situation,” Neff responded.

Walker asked Neff whether he had the option to turn and run away. Neff said no — his job is to take the suspect into custody. 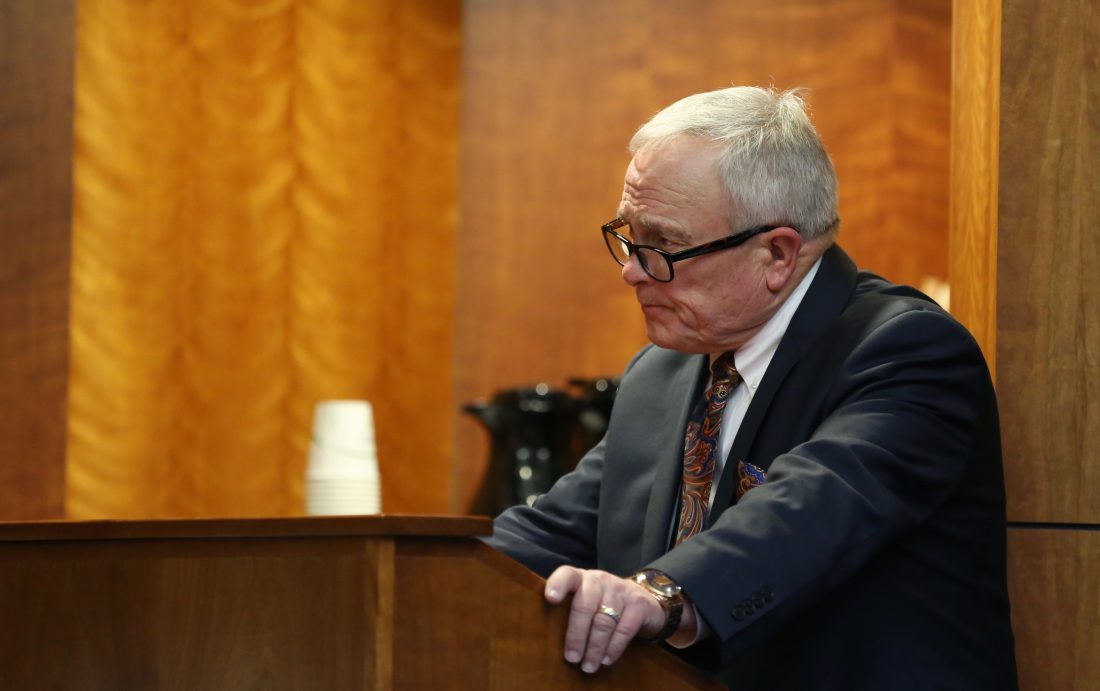 May allegedly fled the Jimmy on foot, abandoning it near 22nd and Louisiana streets.

Lawrence police Officer Ryan Robinson testified about searching the area for May and eventually finding him near some bushes at Walgreens at 23rd and Louisiana streets. Robinson said he notified other officers that he thought he saw the suspect, then shined a light on him and gave chase.

Robinson said May ran toward a nearby house and tried to pull himself up over a fence but didn’t make it. May then lay flat on his back on the ground.

Robinson said it wasn’t really a “fight” to get May into handcuffs, but “he was more passively resisting.” He also described him as “mildly compliant.”

In audio of the arrest played for the jury, May said a few times that he couldn’t breathe. Robinson — his voice identified by Officer Kelsey Pence’s testimony — can be heard responding, “You’re going to get to breathe in a second.”

Robinson is also heard shouting “What’s your name? What’s your (expletive) name?” May answers “James Mason,” but Pence quickly located his driver’s license with the correct identification. The name matched the one dispatch had provided for the suspect.

Robinson said after May was in handcuffs, he called for medics because May was having trouble breathing and he had an open wound on his arm. 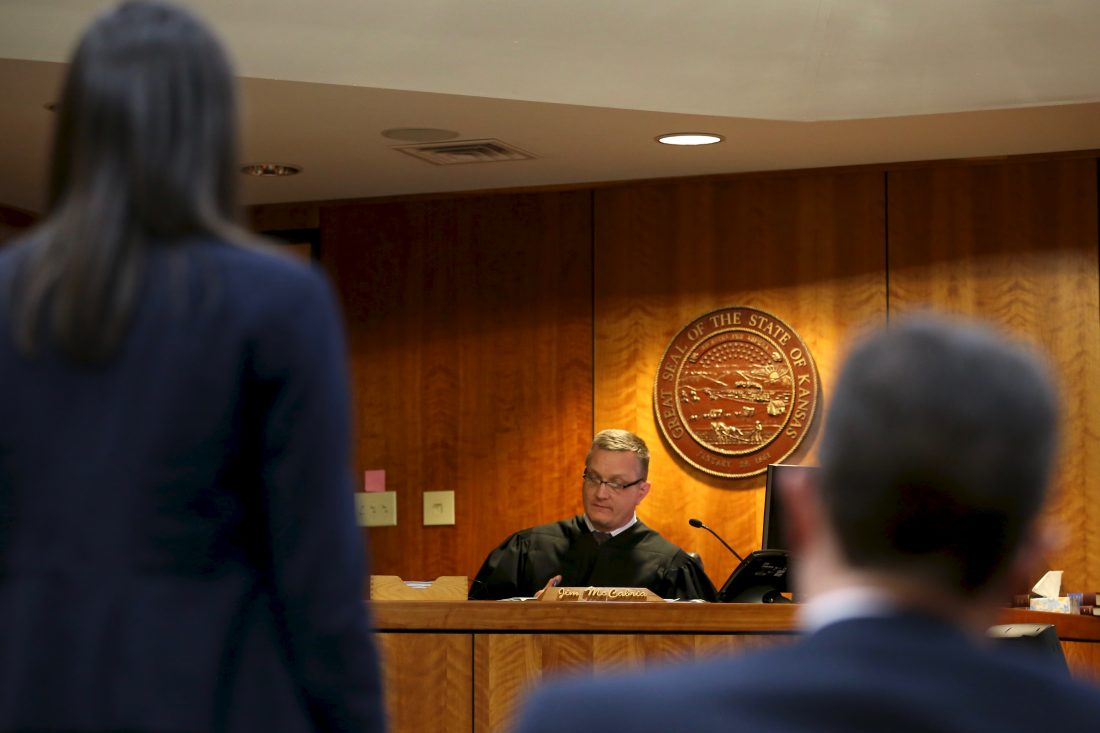 Jurors began to hear testimony Thursday from the Kansas Bureau of Investigation special agent tasked with investigating the crime scene from the officer-involved shooting. His testimony is expected to resume at 9 a.m. Friday. They also got to see the gun May allegedly dropped out the passenger window while his vehicle was stuck on the fire hydrant. It had one bullet in the chamber but no magazine was recovered.

Prosecutors had previously estimated they would be done with evidence by Thursday morning, but the state’s case is taking longer than expected because of numerous objections and legal arguments. Several times Thursday, jurors had to return to the deliberation room so Judge James McCabria and counsel could hash things out.

At one point Thursday, outside the presence of the jury, May blurted out that one witness’ testimony was a lie. He apologized to the judge almost immediately after his remark.

Conwell also reserved his opening argument until the state is done presenting evidence, and then he may call witnesses for the defense. Because of prior obligations of the court, it is not likely the trial will be able to pick up Monday, so it will probably be Tuesday at the earliest before the jury begins deliberating.