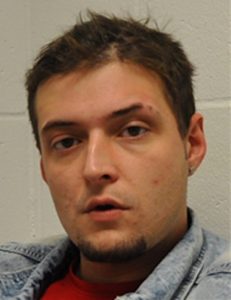 Chandler A. Grey, pictured in October 2019

A man who was convicted of aggravated assault for aiming a gun at another driver on Sixth Street and then holing up in an apartment was sentenced to probation Friday.

Chandler A. Grey, 27, must serve 24 months of probation, according to Dorothy Kliem, trial assistant for the Douglas County district attorney’s office.

Grey pleaded no contest to one count of aggravated assault, a felony. As part of the plea agreement, the prosecution agreed to drop Grey’s second charge, interference with law enforcement.

If his probation is revoked, Grey faces an underlying sentence of 12 months in prison with 12 months of post-release supervision, Kliem said via email Friday.

“As conditions of probation Mr. Grey must comply with directives listed in the probation order, participate in individual treatment, take all medication as prescribed, and obtain an anger management evaluation and complete recommendations listed therein,” Kliem wrote.

He must also pay about $500 in fees and court costs, but Kliem said the judge waived his appointed attorney and probation fees. Grey must register as a violent offender for 15 years, the Journal-World has reported.

Chief Judge Peggy Kittel had warned Grey at his Oct. 25 plea hearing that based on his criminal history, his sentence was in a “twilight zone” and it could be either prison or probation. Kittel said if there were any issues between the hearing and Grey’s sentencing, he would likely go to prison.

Online Douglas County District Court records indicate that the case for Grey’s co-defendant, Domonique Edwards, continues. Her appointed defense attorney had filed a motion to dismiss and previously planned that if that motion were denied, a preliminary hearing could then take place. On Monday, that hearing was continued to Jan. 14, the records show.

The Douglas County Sheriff’s Office denied the Journal-World’s requests for Grey’s booking photo before and after he was convicted.

• Oct. 10, 2019: Lawrence man allegedly threatened motorist with gun, then holed up in apartment with woman