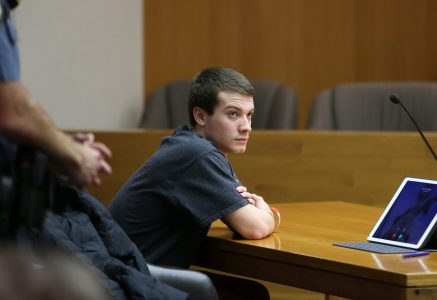 Steven A. Drake III appears in Douglas County District Court during a hearing on Tuesday, Jan. 15, 2019.

A jury trial for a Lawrence man charged with shooting another man in the doorway of his home nearly two years ago has been delayed again as his appointed attorney has withdrawn from the case.

Angela Keck, who has represented Drake from the beginning of the case, filed a motion Friday to withdraw from the case because of a conflict of interest.

In a hearing Monday morning, Judge Kay Huff said she was satisfied that there were issues and conflicts in the case, and she was inclined to grant the motion. She asked Drake if he would like to discuss the issue, and he said he would.

After discussing the issue for a few minutes in the privacy of the jury deliberation room, the judge said Drake understood the conflict, but he was upset about the time that has passed in the case and the further delay that this would cause.

The judge did allow Keck to withdraw and said she had not yet determined whom to appoint next. One reason for that was that a number of people have been involved in the case and would also have a conflict, Huff said. The nature of Keck’s conflict was not disclosed.

The case has been set to go to trial and then continued multiple times over the past 14 months or so; most recently, a seven-day trial was scheduled to begin Monday, Aug. 19. By the time the case does reach a jury, it will likely be at least two years from the time Drake was charged.

Keck previously said that she had planned to argue that Drake was not guilty of first-degree premeditated murder as charged because he acted in defense of himself or others. He previously tried to get the charges dismissed altogether, arguing that he acted lawfully under Kansas’ “stand your ground” law, but the judge denied that request.

According to Drake and three other people at the house with him, Holladay was taking items from the home and refused to leave, even after the four of them tried to physically force him out the door.

Witnesses testified at a preliminary hearing that Holladay was trying to punch them and force his way inside the house when Drake retrieved a handgun from a bedroom and shot him in the face at close range.

The judge instructed Keck to turn over recent discovery in the case to Drake’s next appointed attorney, but she was not to discuss the conflict of interest “or we’ll have another conflict.”

After the hearing, Keck told the Journal-World she wished she could comment, but she couldn’t.

Keck has also been representing Drake in another pending case in which he is charged with vehicular homicide in connection with a deadly crash on Nov. 6, 2016, just north of Clinton Lake. Taylor B. Lister, 24, of Lecompton, was killed in the crash.

As of Monday afternoon, court records indicated that the judge had appointed attorney Carol Cline to represent Drake in both cases.

Drake is set to appear in court next on Aug. 20.