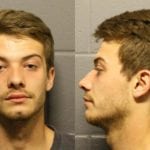 A Lawrence man who has been jailed over a year awaiting trial on a murder charge has picked up another new charge from an old incident.

Steven A. Drake III, 21, was charged this week with vehicular homicide in connection with a deadly crash on Nov. 6, 2016, just north of Clinton Lake. Taylor B. Lister, 24, of Lecompton, was killed in the crash.

Drake allegedly operated a vehicle in a way that created “unreasonable risk of injury” and was a “deviation from the standard of care which a reasonable person would observe under the same circumstances,” according to the complaint filed Tuesday in Douglas County District Court. The vehicular homicide charge is a misdemeanor.

The crash happened about 11 a.m. in the 1400 block of East 700 Road, the newspaper previously reported. Drake was driving a 1970 Chevy truck that left the roadway, entered a ditch and hit a tree. The Douglas County Sheriff’s Office said the reasons the truck left the road weren’t known at that time.

Neither Drake nor Lister was wearing a seat belt. Both were taken to a Topeka hospital, where Lister died.

Bryce Holladay, 26, of Lawrence, whom Drake and his roommates were acquainted with, had come in earlier and was rummaging through the home and acting bizarrely, according to previous court testimony. After the residents reportedly ordered Holladay to leave and tried unsuccessfully to physically force him out the door, Drake retrieved a handgun, pointed it at Holladay’s face and shot him at close range in the doorway.

Drake told police what he had done and was initially arrested on suspicion of voluntary manslaughter, but prosecutors charged him with first-degree murder. Drake’s attorney has argued in court that he shot Holladay in defense of himself and others. His murder trial is set to begin Jan. 14.

The vehicular homicide case is not the first new charge Drake has picked up since his arrest in Holladay’s shooting.

In November 2017, Drake was charged with aggravated battery, a felony, stemming from an unrelated fight the previous summer. The 16-year-old victim spent a week in the hospital after undergoing surgery for a brain bleed, his mother previously told the Journal-World.

The Douglas County District Attorney’s Office said it has been filing the cases against Drake in order of severity, focusing its attention on the murder case first.

“We have been working through his cases trying to advance each case past their preliminary stages before filing the next case,” Wright Kunard said in an email. “Since the first degree murder case is the most severe, anything that would have been filed before or after that case would typically trail that case.”

Wright Kunard declined to share details outside the courtroom about circumstances that prompted criminal charges in the crash.

Drake does not yet have an attorney listed for his new case. Appointed attorney Angela Keck is representing him in the other two.