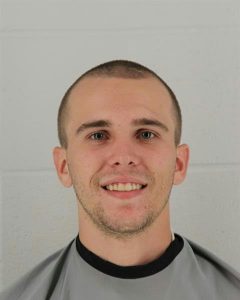 A man has been charged with multiple felonies in Douglas County District Court in connection with a disturbance in May.

Seth A. Kenney was charged Tuesday with three counts of felony aggravated assault for allegedly threatening an adult and two 13-year-olds with a gun, according to court documents. He is also charged with fleeing or attempting to elude a police officer, a low-level felony.

Lt. Kristen Channel, of the Douglas County Sheriff’s Office, said the case is associated with an investigation into a report of a disturbance with weapons the evening of May 10 near the Kansas Highway 10 interchange at Iowa Street.

Additional information about the nature of the incident was not available Wednesday. The Journal-World has requested the affidavit supporting Kenney’s charges.

According to online Johnson County District Court records, Kenney is 20 years old and was 19 at the time of the alleged offenses. As of July 31, records indicate, he was a resident of Gardner — about a 30-mile drive southeast of Lawrence.

Tyler Garretson, of Olathe, is Kenney’s defense attorney. Garretson said via email Wednesday that at this early stage in the proceedings, he and his client do not have comment.

Kenney is next scheduled to appear in Douglas County District Court on Sept. 3.