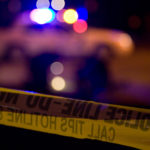 Police say two masked suspects barged into a home overnight while the Lawrence residents were sleeping and threatened to harm them.

The incident was reported about 3:10 a.m. Monday in the 900 block of West 22nd Street, Lawrence police said in an email to media.

The suspects, both males, were wearing masks and all black clothing, according to police. They threatened to harm the homeowners if they didn’t do what they were told.

Police did not say what the suspects demanded of the homeowners, but they said they thought the incident was drug related.

Both suspects left before police got to the scene, according to the email. The investigation remained ongoing Monday morning.