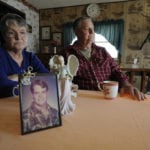 Linwood high school senior Randy Leach vanished from a graduation party in 1988. His parents, Harold and Alberta Leach, are pictured in November 2014.

This month marks yet another year since Linwood high school senior Randy Leach vanished from a party, never to be seen again.

His parents are trying yet another avenue to solve the mystery, albeit one that may be legally inventive.

“We’ve tried so many different things and haven’t had any success,” Randy’s mother, Alberta Leach, said.

“We have fought with Leavenworth County. We’ve fought with the KBI. We went to court to try to get the records, and the judge denied us the records. After 30 years — it’s 31 now — we just felt we couldn’t get any help from anybody.”

They think “new eyes” could find something others haven’t, Alberta said.

The couple has posted a change.org petition seeking 5,000 signatures asking the governor to sign an executive order creating the special master-led task force. Last week the online petition, which isn’t a formal legal or government filing, had about 3,800 signatures.

However, Alberta said she had already approached Kelly without waiting for the signatures, in a letter shortly after the governor took office in January and in person after a town hall meeting in the Kansas City area.

Kelly’s communications director, Ashley All, told the Journal-World last week that the governor couldn’t grant such a request.

“While Governor Kelly’s thoughts are with the Leach family, she does not have the legal authority to require a new investigation or appoint a special master,” All said in an email.

She said the Kansas attorney general may have the authority to request a criminal investigation. A spokesman for the AG’s office said the Leach case remained an open investigation by the KBI and referred questions to that agency. The KBI doesn’t have authority to designate a special master, either, a spokeswoman said, noting that to the agency’s knowledge such people must be court-appointed.

Alberta and her husband aren’t working with a lawyer on their current effort to find out what happened to their only child.

“What’s being asked for here is not typical,” said David R. Cohen, a Cleveland-based private attorney who specializes in working as a special master to federal judges dealing with complex litigation. Among other matters, Cohen was appointed special master in the recent federal case involving prosecutors recording privileged conversations between defense attorneys and their clients at the federal prison in Leavenworth.

Normally, outside special masters are brought in as neutral “judge’s helpers” for particularly complicated and time-consuming litigation, in federal or state courts, he said.

Cohen said he’s not sure whether state law, in Kansas or elsewhere, allows for appointing outside special masters to law enforcement investigations.

He said it’s possible there’s some other route for appointing a person who would do essentially the same thing, investigate as a neutral, independent party without ties to the issue at hand — which is essentially what the Leaches want.

The Leavenworth County Sheriff’s Office and the KBI investigated.

Randy’s parents have complained over the years that law enforcement has been too secretive, failing to keep them adequately informed about developments in the investigation.

In recent years, with the case decades old and still not solved, they’ve tried to get copies of law enforcement’s case file. However, they’ve been denied because it’s still considered an open investigation, a category of record that’s generally not required to be released under the Kansas Open Records Act.

A previous open records request from the Journal-World also failed.

So did a bill proposed to the Kansas Legislature in 2017, which would have given the public more access to investigation records from missing-person cold-cases more than 25 years old. 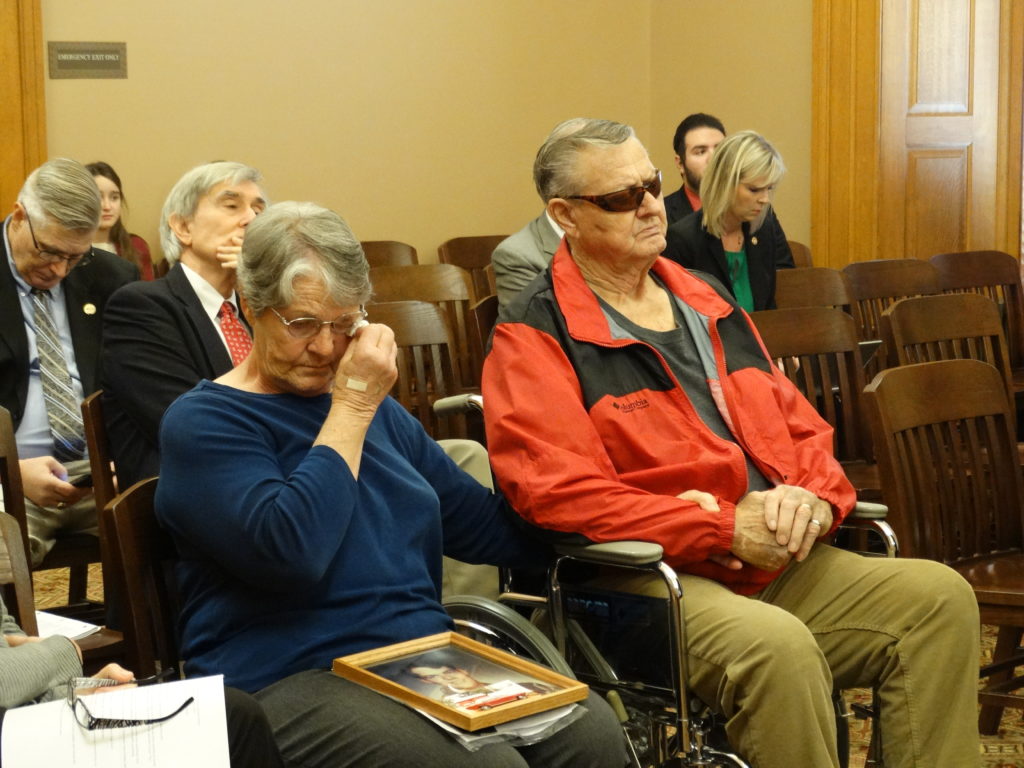 Alberta Leach wipes away tears during a 2017 Senate committee hearing, sitting next to her husband Harold and holding a portrait of their son Randy, who disappeared in 1988. The committee voted to advance a bill that would unseal some of the investigation records in their son’s case.

Later in 2017, the Leaches filed a lawsuit in Leavenworth County District Court seeking to force the county and its sheriff’s office to release investigation records. In the suit, their attorney, Max Kautsch, argued that the records should be released under a provision of the law that allows for criminal investigation records to be released when in the public interest.

After demanding, then reviewing, an estimated 2,000 pages of records from the investigation, Judge David King ruled against the Leaches, ordering that the documents stay sealed.

Alberta said the couple thought about appealing their lawsuit but chose not to. They didn’t want to pay for another lawyer and repeat a similar process.

“We didn’t want to go through the stress,” she said. “That’s pretty stressful at our age.”

While the legislative bill was pending, Alberta said she and her husband got permission to view the KBI investigatory records in person in Topeka. Daunted by thousands of pages and the multiple trips and time it would take to look through them, she said they chose not to.

“There’s no way that we could have done that,” she said.

The KBI and the Leavenworth County Sheriff’s Office, which have jointly investigated Leach’s disappearance, say they continue to work on the case as tips come in.

“Over the years, periodically we have assigned new agents to review the case with fresh eyes,” KBI spokeswoman Melissa Underwood said, in an email. “This has resulted in certain interviews being repeated, and alternative theories being explored. We have great empathy for Randy’s family. We have worked diligently in an attempt to provide resolution to them, but currently no new, credible information exists that has not been fully investigated.”

Leavenworth County Undersheriff James Sherley said law enforcement still does not have enough evidence to classify Randy’s case as a homicide investigation, accident or any other category.

Sherley said law enforcement has worked with the Leach family through the years, at times more closely than others. He said the investigation is still a priority for his department.

“We continue to march forward on the case, believing that any type of outcome might be the result,” Sherley said. “As leads come in we’re going to work on them as if the case was hours old, not 31 years old.”

Over the years, theories about what happened to Randy have abounded, some more bizarre than others.

There were rumors he had ties to a Satanic cult that led to his demise. Other theories have linked his disappearance to Leavenworth County residents convicted of or charged in other homicides.

One investigator on the case, now retired and vexed that he never could close it, went public a year ago with his theory about what happened to Randy.

Timothy Dennis, a special agent with the KBI, became the agency’s lead investigator about 10 years after Randy’s disappearance and stayed on the case until his retirement in 2010.

Dennis told the Kansas City Star in 2018 that he didn’t think foul play was to blame for Randy’s disappearance.

Rather, Dennis said he believed Randy tried to drive home from the party, lost control of his mother’s car on a single-lane bridge with no guardrails on the approach, and plummeted into Stranger Creek. Dennis theorized the car either sunk into sediment, making it nearly impossible to detect with divers or other equipment, or was eventually washed miles away.

The Star reported that Stranger Creek at that location, Golden Road, wasn’t searched by Leavenworth detectives for the first 10 years of the investigation.

Dennis contended that when Randy vanished the creek was deep enough to support his theory, but Randy’s mother still doesn’t buy it.

To Alberta — with yet another April 16 just passed — the mystery is definitively unsolved.

She said she and her husband don’t do anything special on the anniversary of Randy’s disappearance.

“We think about it every day,” she said. “We try to keep busy, and just try to keep our minds occupied.”

They are still optimistic for a break in the case, that maybe someone will come forward or new evidence will surface.

“We’re not giving up,” Alberta said. “We’re going to keep pushing. Somebody’s got to give here one of these days.” 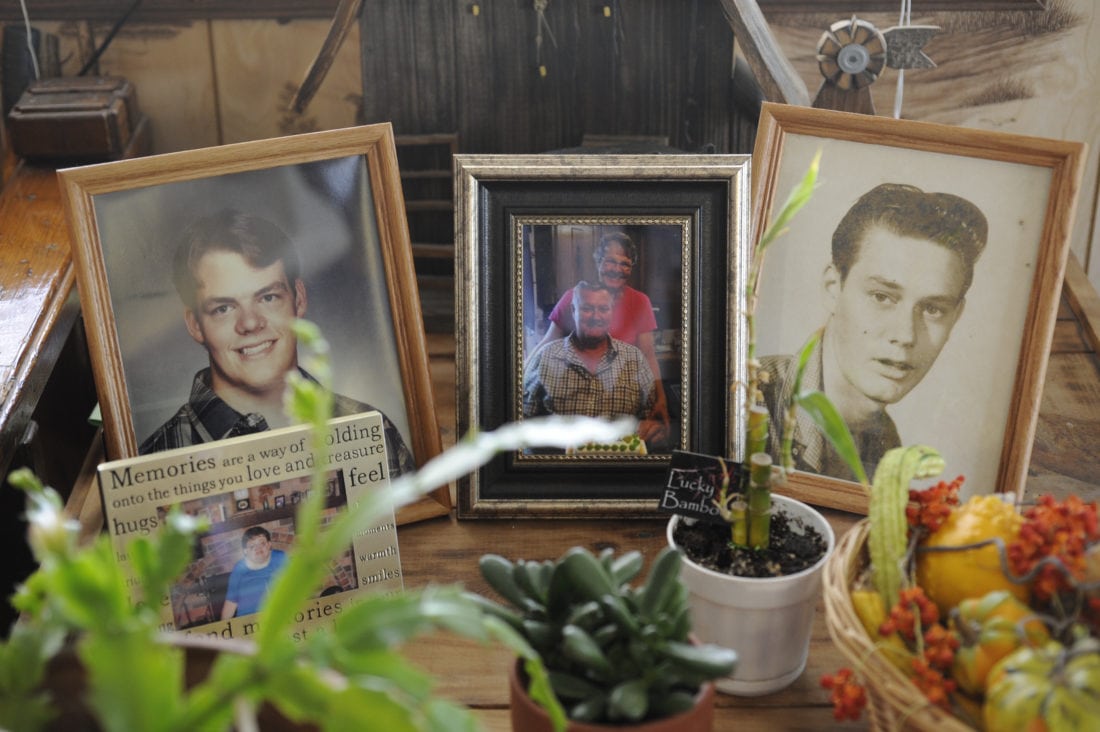 Randy Leach’s senior picture appears on a table with other family photos at the home of his parents, Harold and Alberta Leach, in this 2014 photo.