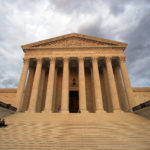 Oral arguments in the appeal, Kansas v. Charles Glover, will be set for the fall.

“I am encouraged by the U.S. Supreme Court’s decision to hear our appeal to help bring clarity to this aspect of the law,” Schmidt said, in the news release. “Numerous other state supreme courts and federal courts have ruled it is reasonable for an officer to suspect the registered owner of a vehicle is the person driving their car.”

In the Glover case, an officer on routine patrol ran a registration check on a pickup truck with a Kansas license plate, Schmidt said. The Kansas Department of Revenue database indicated the truck was registered to a person with a revoked license. Without seeing other traffic infractions or identifying the driver, the officer pulled over the truck, found the registered owner was in fact driving and cited him as a habitual violator for driving while his license was revoked.

In July 2018, the Kansas Supreme Court decided that wasn’t proper.

The Kansas court held that without more information, it is not reasonable under the Fourth Amendment to the U.S. Constitution for a police officer to suspect that the registered owner of a vehicle is the person driving the vehicle, according to Schmidt. Thus, he said, the court held that law enforcement officers can’t make a routine vehicle stop when the officer knows the registered owner doesn’t have a valid license and has no reason to think that anyone other than the owner is driving.

Further state court proceedings in the Glover case are on hold until the U.S. Supreme Court issues a ruling on the merits in the appeal, Schmidt said.

The appeal is one of three Kansas cases the AG’s office plans to argue before the U.S. Supreme Court this fall.