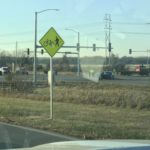 This photo submitted by a reader shows the aftermath of a three-car crash Thursday, Nov. 15, 2018, at the intersection of Kansas Highway 10 and 27th Street in southwest Lawrence.

One motorist was seriously injured in an early morning wreck at a stoplight on the South Lawrence Trafficway, at the southwest edge of town.

The crash, which involved three vehicles, happened just before 6 a.m. Thursday on the portion of Kansas Highway 10 known as the South Lawrence Trafficway at the 27th Street intersection, Sgt. Kristen Channel of the Douglas County Sheriff’s Office said.

A 31-year-old Topeka man was driving a Toyota Corolla east on K-10 when he failed to stop and rear-ended a car that was stopped at the light, Channel said. That car was pushed into a pickup truck stopped directly in front of it.

The Topeka man, who was not wearing a seat belt, was taken by ambulance to Stormont Vail Hospital with serious injuries, Channel said.

The driver of the car he hit, a 23-year-old Topeka woman, sustained minor injuries, Channel said. She was wearing a seat belt.

The driver of the pickup, a 56-year-old Lecompton woman, was not hurt, Channel said. She also was wearing a seat belt.

None of the drivers had any passengers.