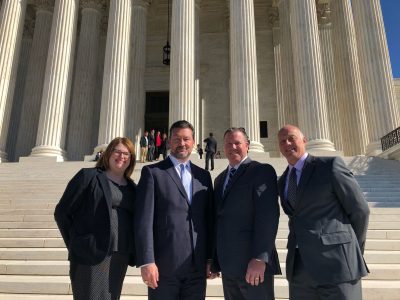 WASHINGTON — The Supreme Court seems ready to say police may pull over a car when they know only that its owner’s license is not valid — even if they don’t know who’s driving.

The issue of traffic stops based on information gleaned from motor vehicle records has become more pressing with the advent of automated license plate readers that can run hundreds of plates a minute.

The justices indicated in arguments Monday that they would reverse a Kansas high court ruling that found police violated a driver’s constitutional rights when they stopped his pickup based only on information that the truck owner’s license had been suspended.

Chief Justice John Roberts was among justices who suggested that the common-sense view that the owner would be driving was enough to justify the traffic stop.

The Supreme Court has previously ruled that police face a relatively low burden known as “reasonable suspicion” to stop and question people.

“As we’ve said often, it can be based on common sense,” Roberts said.

It’s reasonable for an officer to make the traffic stop even if the driver turns out not to be the registered owner most of the time, he said.

The situation arises when an officer can’t easily see into a vehicle to determine, for instance, that a woman is driving the vehicle, though the vehicle’s owner is a man.

Siding with the driver in this case, Charles Glover of Kansas, could raise practical problems, some justices said. If the window glass is tinted and an officer can’t easily see in, the officer “has to let the driver go on?” Justice Ruth Bader Ginsburg asked.

Justice Brett Kavanaugh said he was troubled by the possibility that a patrol car would have to follow a driver waiting for a minor traffic infraction to pull over the car.

Justices Elena Kagan and Sonia Sotomayor sounded like the most likely votes for the driver. They suggested in their questions that police officers can easily justify a traffic stop based on their experience and training. In this case, the Kansas court said police relied on nothing other than Glover’s suspended license, they said.

“It was an amazing experience watching the Court debate a factually simple issue and its impact on the definition of reasonable suspicion and the rights of individuals,” Branson said in an emailed statement to the Journal-World.