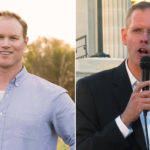 photo by: Contributed and AP photos

The 2nd District congressional race in Kansas is one that is being watched closely around the nation this year.

With five-term incumbent Rep. Lynn Jenkins, a Topeka Republican, stepping down this year, it is an open race and one that could help determine whether Republicans will keep control of the U.S. House or whether Democrats will take back the reins after eight years in the minority.

The race features a seasoned politician on the Democratic side, former Kansas House Minority Leader Paul Davis, a Lawrence attorney who was the Democratic nominee for governor in 2014.

Davis faces a political newcomer on the Republican side, Army veteran Steve Watkins, of Topeka, an engineer and self-described outdoor adventurer.

The district covers most of the eastern third of Kansas, outside of the Kansas City metropolitan area. It stretches from the Nebraska border to the Oklahoma state line and includes the cities of Lawrence, Topeka, Leavenworth and Pittsburg.

Republicans haven’t taken any chances with the race. President Donald Trump and Vice President Mike Pence have both visited Topeka to campaign for Watkins. And the Congressional Leadership Fund, a super PAC with ties to House Speaker Paul Ryan, has spent more than $3 million on Watkins’ behalf.

Likewise, the Democratic Congressional Campaign Committee has poured money into the district on behalf of Davis. But Davis also has been successful raising money on his own, reporting nearly $3 million in campaign contributions since August 2017.

Davis, 46, has run on a theme of bipartisanship and what he says is a need for new leadership in both political parties. He touts endorsements from 36 current and former Republican elected officials, and he has vowed that, if elected, he would not support California Rep. Nancy Pelosi, the current Democratic leader in the House, to be speaker of the House again.

Watkins, 42, has countered that, if Davis is elected, Pelosi will become the next speaker, whether Davis supports her or not. He has run as a strong ally of Trump, saying he supports the administration’s policies on tax cuts, international engagement with Iran and North Korea, and his picks for the U.S. Supreme Court.

The race has also been marked by controversy over Watkins’ claims about his own background. A report by The Associated Press in early October quoted sources as saying Watkins embellished stories about his exploits on Mount Everest and in the Iditarod. And a Kansas City Star report in September indicated he had overstated his role in the engineering firm where he now works by claiming he had owned the company and built it up from scratch when he hadn’t.

On issues in the campaign, Davis and Watkins differ sharply.

Davis is a strong supporter of the Affordable Care Act, otherwise known as Obamacare, although he says some aspects of it need to be improved. He says more should be done to rein in the cost of prescription drugs, and he wants to take steps that would encourage more insurance companies to participate in the ACA’s online marketplaces.

Davis has also said he would work to preserve Medicare and Social Security and that he would not cut benefits from either program to balance the budget or pay for tax cuts.

Regarding international trade, Davis has criticized the Trump administration for imposing tariffs on imported steel and aluminum, and he has been critical of the escalating trade war between the United States and China. But he does give the president good marks for renegotiating the North American Free Trade Agreement, or NAFTA, which the Trump administration now refers to as the U.S.-Canada-Mexico Agreement.

And on immigration, Davis has said he supports strengthening security along the U.S. border with Mexico, although he doesn’t necessarily support building a wall along the entire 2,000-mile stretch. He also says he supports providing a pathway to citizenship for undocumented immigrants who have been living in the country, paying taxes and not committing other crimes.

Watkins, by contrast, has been a harsh critic of the Affordable Care Act and has called for its repeal. He has, however, said he supports protecting people with pre-existing conditions, and he supports a provision of Obamacare that allows parents to keep their children on their family policies until age 26.

Regarding Social Security, Watkins has said the system is unsustainable in its present form and that people younger than the baby boom generation — generally, those born in the mid-1960s and later — should brace themselves for the likelihood that they won’t see the same kind of benefits that earlier generations receive.

Watkins has also fully supported Trump’s policies of trying to pressure North Korea into ending its nuclear program and pulling out of a multilateral agreement with Iran that was designed to incentivize that country to end its nuclear program.

Watkins also supports many of Trump’s policies on immigration, including building a border wall, ending what is often called “chain” migration that allows legal immigrants to bring their families with them, and ending what is often called the “visa lottery” system, formally known as the Diversity Immigrant Visa program, which awards a certain number of visas each year to people from countries with low immigrant numbers.

Also on the ballot in the 2nd District is Libertarian candidate Kelly Standley, of St. Paul.

Public polling so far has shown it a close race in the 2nd District, although neither side has released any new polls since Trump’s Oct. 6 campaign rally in Topeka.