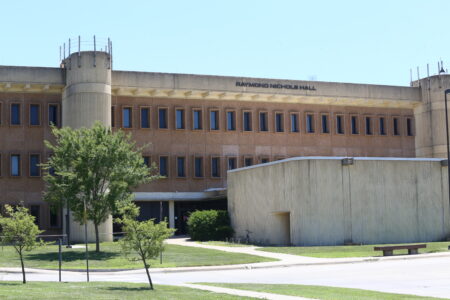 Nichols Hall on the University of Kansas' West Campus, is pictured on June 30, 2022.

As KU professor Perry Alexander made his pitch for $3 million of prized university funding, he pointed to a New Yorker cartoon that makes its way around the internet.

It shows a dog sitting in front of a computer keyboard, exclaiming to another canine that “on the internet, nobody knows you are a dog.”

“That’s the essence of the problem,” said Alexander, a distinguished professor in electrical and computer science. “We don’t always know what is going on in the internet, and we don’t have control of our information.”

The University of Kansas hopes to help solve that problem and more, awarding $3 million in funding Thursday to start a new center for cybersecurity and $9 million of funding for three other projects in the fields of medicine and science.

Thursday’s announcement was the culmination of KU’s first Research Rising Competition, which promised to award at least $12 million of KU Endowment funds over a five-year period to promising research initiatives.

“We have an incredible brain trust here, so we thought the best way forward was to ask people what they could do if they had the money,” Simon Atkinson, KU’s vice chancellor of research, told the Journal-World in November when describing the new Research Rising competition, which was open to faculty members across KU’s Lawrence and Edwards campuses.

KU chose four projects to equally share in the $12 million of funding. They are:

• An effort to create a new cybersecurity research center that will be housed in Nichols Hall on KU’s West Campus. In addition to Alexander and his team at KU’s Institute for Information Sciences, faculty members in engineering, philosophy, history and journalism will be part of the new center. The center expects to receive significant research grants from the National Security Agency and other federal agencies, plus KU intends to lobby Kansas’ congressional delegation for infrastructure funding to help establish the center.

• A project to create a new center that will change how researchers go about finding cures and treatments for some of medicine’s most vexing conditions, such as cancer, dementia, infectious diseases and others. Led by Michael Wolfe, a professor of medicinal chemistry, the center will use artificial intelligence and large amounts of computing power to analyze much more data in much less time. The center, which focuses on the fields of systems pharmacology and translational science, will include faculty members in pharmacy, chemistry, electrical engineering and computer science and in multiple departments at the KU Medical Center.

• Funding to boost KU’s existing Center for Genomics, which studies the genetic code of humans and other species. The new funding will allow the center to add faculty members and data analysts, which KU leaders said could “rocket” KU to “a position of national leadership in genomics.” The type of subjects tackled could be varied, but hot-button topics like research on how climate change is impacting the genetics of certain species, and documenting changes in COVID-19 both were mentioned as possibilities. Rob Unckless, director of KU’s Center for Genomics, and Lena Hileman, professor of ecology and evolutionary biology are leading the project. The center also includes faculty members in anthropology, molecular biosciences and engineering.

• Funding to build upon KU’s nationally recognized expertise in the research field of intellectual and developmental disabilities. For more than 50 years, KU has had a heavy focus on research related to autism and other developmental disabilities. With the additional funding, KU will create a new multidisciplinary center that will allow a broader range of researchers to participate in the work and also will allow KU to add more faculty members and better recruit individuals who can participate in studies related to the research. John Colombo, director of KU’s Life Span Institute, is leading the project, and faculty in psychology, special education, medicine and psychiatry also will take part.

photo by: Courtesy: University of Kansas

All four projects involve researchers from various fields coming together to collaborate. Atkinson said that the broad-based approach was helpful in “addressing critical challenges facing humanity” and that the collaboration also was expected to attract more research dollars to the university.

“What’s more, these teams will be highly competitive for federal research funding, so we anticipate a steady influx of external dollars in the future that will outpace KU Endowment’s initial $12 million investment to help establish these initiatives at KU,” Atkinson said in a news release from KU.

KU leaders created the Research Rising competition with the idea of finding research projects that would tackle big problems. All applicants had to tie their proposals back to at least one of five strategic areas that KU previously selected: Earth, energy and environment; human experience in the digital age; molecules and medicines; safety and security; and development across the human lifespan.

The winning teams touted their desire to tackle big problems. Wolfe said the field of drug discovery needed to undertake this broader systems pharmacology approach that KU and other institutions are promoting. He said the traditional method of drug discovery too often was like “searching for a needle in a haystack.” With artificial intelligence, researchers can look at multiple aspects of a disease, where in some cases they previously spent an entire career focused on a particular protein or gene, for example.

“We need to embrace the complexity, not avoid it,” Wolfe said.

Alexander said now is absolutely the time for KU and others to invest in a cybersecurity research center. He said the world was clearly immersed in an information revolution and that the nature of warfare was changing as a result. Adversaries have advantages the U.S. hasn’t yet figured out how to counter, and, unlike with traditional warfare, there is no place a country can retreat to in a cyberwar.

“The battlefield isn’t a place,” Alexander said. “It is all around us. It is wherever information is.”

Alexander said the internet was far too advanced to completely redesign at this point, and “we wouldn’t even know how to turn it off,” if we had to. Given that, he said it is critical that researchers figure out how to make the system better and more secure.

“We can’t walk away from this,” Alexander said. “It defines who we are.”

KU students will be returning to campus later this month; here are some dates to know

Lawrence's streets, public transit and businesses will get a little busier in the next couple of weeks as ...

The University of Kansas’ business school has added a specialized professorship in analytics and related fields, ...