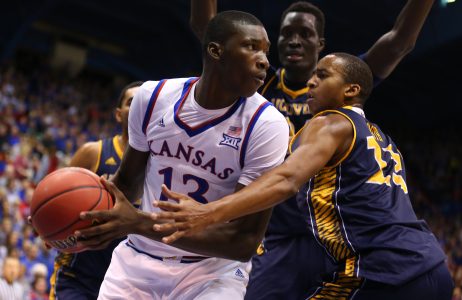 In this file photo from Tuesday, Dec. 29, 2015, Kansas forward Cheick Diallo (13) looks for an outlet as he is defended by UC Irvine forward Brandon Smith (13) and center Mamadou Ndiaye (34) during the second half at Allen Fieldhouse.

Until Thursday, Silvio De Sousa and Billy Preston were publicly regarded as the only Jayhawks involved in the current NCAA allegations against the University of Kansas.

But a section of the NCAA’s response, released by KU on Thursday, indicates that there may have been a third.

A heavily redacted portion of the report raises questions about whether a representative of former KU player Cheick Diallo received an improper payment from then-Adidas representative T.J. Gassnola. Diallo played for KU during the 2015-2016 season.

The NCAA document redacts the name of the player and also the year of the alleged incident. But the document, perhaps inadvertently, left unredacted the last name of the individual alleged to have received the payment from an AAU team run by Gassnola.

The name was Drame. A biography on KU’s basketball website lists Tidiane Drame as Diallo’s legal guardian during the time he was at KU.

If true, the allegations are significant because they show improper payments being made as early as 2014 or 2015, which is earlier than the first suspected case, which involved Preston, who was on the KU team for part of the 2017-2018 season.

It is unclear how the NCAA Eligibility Center viewed the alleged payment, which was discovered as part of a review of bank records. Diallo was ruled eligible to play for KU.

However, in light of the federal indictments against Gassnola and other former Adidas officials in 2018, the NCAA’s enforcement staff recently investigated the matter. According to the NCAA document, it conducted a January 2019 interview, presumably with Drame, although his name is redacted in that particular sentence of the document.

In the interview, he did not deny receiving a wire transfer from Gassnola’s New England Playaz team. He said he was unsure why he would have received that payment but was adamant that it was unrelated to Kansas or any of its players.

The NCAA was unable to determine the amount of the payment. The individual had attempted to redact the transaction from the bank statement provided to the NCAA. However, portions of the statement were still readable and identified the Gassnola connection.

In the recently released report, the NCAA made a finding that Gassnola paid an indeterminate amount of money to Drame in violation of at least three NCAA bylaws. If that finding is upheld, it is unclear how that may affect KU and any particular penalties levied against the university. For instance, it is unclear whether the violations would be enough to cause the NCAA to require KU to forfeit wins in the 2015-2016 season involving Diallo.

The NCAA in 2015 did suspend Diallo for five games of the season over impermissible benefits of $165 that he received from Drame. However, in announcing that suspension in 2015, the NCAA made no mention of Drame receiving an impermissible payment from Gassnola. It is unclear whether the $165 payment discovered in 2015 is related to the Gassnola payment.

A spokesperson for Kansas Athletics did not respond to a request for comment about the NCAA’s allegations of a third KU player connected to impermissible payments.