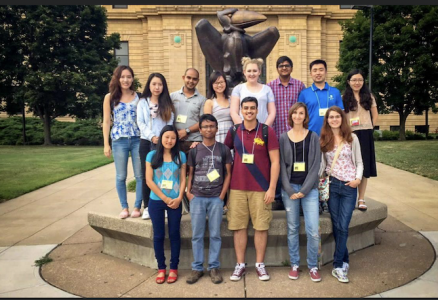 International students at the University of Kansas pose outside of Strong Hall on the Lawrence campus.

International students at the University of Kansas were in for a surprise last week after initially believing the Kansas Board of Regents voted to keep tuition and student fees flat for the coming academic year.

That fee, which funds various services specifically for international students, was a mere $40 when KU doctoral student Hollie Hall first came to the university as an undergraduate student in 2012 — an almost eight-fold increase in eight years.

After finding out their required fee had, in fact, nearly doubled overnight, Hall decided to take action. She launched an online petition on Change.org Monday asking for KU to hold the fee flat, as it had for all other student fees, and it already has nearly 2,000 signatures.

“We feel that the University is exploiting and alienating us, the international community, exacerbating divides between students domestic and international already present in the Jayhawk Community,” the petition reads. “We implore the University to treat us better and embody the values of Diversity and Inclusion that KU has proclaimed as paramount.”

Hall said reasons she’s been given as to why the fee was nearly doubled were that KU’s international enrollment has fallen since 2016, the International Student Services Office has been operating at a deficit for years, and the university needed to remain competitive.

A better solution for that problem than doubling the burden only on international students, she said, would be to have every KU student pay a smaller fee to fund the ISSO, as they do many other campus operations — such as the campus fitness center, buses, and the student health clinic, among other things.

“You add all these things on and it’s just pushing international students out,” she said. “It seems really unfair we’re the only ones that fund ISS. That’s really unfair and discriminatory.”

KU spokesperson Erinn Barcomb-Peterson confirmed to the Journal-World that the fee increase was due to a declining enrollment. Though asked, she did not address Hall’s petition.

“…The existing fee revenue was inadequate to support the services it offers to international students, even in spite of staffing cuts and furloughs,” Barcomb-Peterson said. “The new fee rate will allow the office to continue its role in advising international students on issues like visa rules and procedures, their classes and time management, and connecting with the campus and Lawrence community.”

“What we found out from this whole experience is that universities aren’t very clear on how they use their money and how they change international students,” she said.