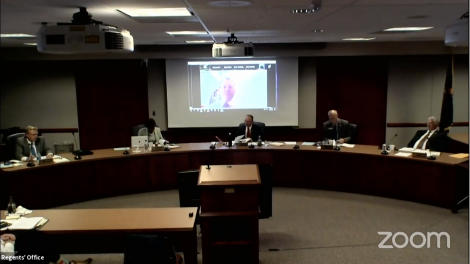 Members of the Kansas Board of Regents meet on Wednesday, June 17, 2020. Because of the COVID-19 pandemic, some members appeared at the meeting via Zoom.

Tuition at the University of Kansas will officially stay flat for the second consecutive academic year as the COVID-19 pandemic continues to disrupt higher education.

The Kansas Board of Regents on Thursday morning approved KU’s request — which the university first announced in early May — to hold both tuition rates and required fees for all students at their current levels for all university campuses given the financial impact the pandemic has had on students and families.

Tuition rates per credit hour at the Lawrence and Edwards campuses are as follows:

Required campus fees for students at the Lawrence campus will remain at $491.95 per semester.

Campus fees for students at the Edwards Campus in Overland Park increased by $6 to $82 per semester, but the increase was deducted from course fees, so there was no net increase for those students.

KU Medical Center students will continue to pay campus fees of $421.77 per semester.

KU Chancellor Douglas Girod gave a brief presentation before the regents on Wednesday, saying that before the university held tuition flat last year it hadn’t done so since 1983.

“A lot of sacrifices were made last year to do that, and we’re prepared to do that again,” Girod said. “Just recognizing the challenges everyone is facing and the universities are facing.”

Girod on Wednesday also gave a new look at the costs KU has already faced in addressing the COVID-19 pandemic.

In costs alone to provide KU students refunds or credits for unused housing and dining packages, plus an increased investment in technology, investing in COVID-19 testing supplies, quarantine facilities and personal protective equipment, KU is staring down an additional $18 million in necessary upkeep, Girod said.

KU has also identified $3.64 million in known cost increases it faces at the Lawrence and Edwards campuses, plus another $2 million in increases at the Med Center campus.

At the Lawrence and Edwards campuses, those costs are as follows:

• $1.25 million in IT security and network enhancements

“It’s just what we have to do to keep the lights on,” Girod said.

The chancellor in recent weeks has said KU is facing a budget shortfall of at least $120 million in the coming fiscal year, which starts July 1, and repeated that figure to the university’s governing body Wednesday.

Girod also highlighted how much state funding percentages have fallen since 2008, which has affected how KU operates from a revenue perspective.

Other news and notes from June’s regents meeting

• Girod said Wednesday during a meeting of regent university presidents that KU is close to finalizing a COVID-19 testing policy for the fall semester, and will soon know how much such a policy will cost. Once that cost becomes clear, Girod said the university hopes to formally submit a proposal to Gov. Laura Kelly’s office in the hopes of using some federal funds to pay for the likely costly undertaking.

• Regents President Blake Flanders said it remained the goal for regents institutions to open for in-person classes in the fall semester.

“We know this venture is critical for our communities and for our economy,” he said. “We’re going to ensure our campuses are as safe as anywhere in the country because we’re going to do the right kinds of things to make sure safety is our No. 1 priority.”

• Lawrence Mayor Jennifer Ananda, who is also the Title IX coordinator for Emporia State University, said it has been difficult for universities to adapt new policies in line with requirements from the U.S. Department of Education.

Essentially what universities have had to do, she said, is figure out how they can be minimally compliant with the new guidelines by the required date of Aug. 14 and then further strengthen policies once students return to campus and can be part of the greater discussion.