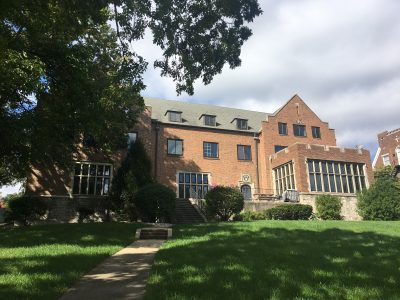 Alpha Kappa Lambda currently resides in this fraternity house, pictured on October 11, 2019, which used to hold Delta Upsilon before their termination.

Students were urinated on and hit by their fraternity “brothers.” A highly intoxicated student was tied to a decorative anchor outside a sorority house. Students used cocaine to draw their fraternity’s Greek letters at their chapter’s spring break house.

These were the details revealed this fall when the University of Kansas released documents related to its investigation into Delta Upsilon, a fraternity that was ultimately suspended in July of 2018.

Additional details of the fraternity’s hazing practices are still hidden from the public eye.

In the 14 pages of investigation documents, three pages in a row are completely redacted and two other pages have large chunks of information blacked out.

The end result has been a nagging question: What other harm may have come to the fraternity members? KU leaders say a federal privacy law prevents them from disclosing certain information related to the hazing. But a civil liberties advocate questions whether KU interpreted the law too broadly, and a legal expert argues the law may be outdated.

He said that in his experience, university officials don’t sit there thinking, “How do we hide something?”

But the redactions and the secrecy “makes the school look like they’re hiding something, even if they’re not,” Lake said.

The whole situation “begs the question, why is that protected?” Lake asked.

KU cited the Family Educational Rights and Privacy Act (FERPA) as the reason why numerous pages and large sections of the documents were redacted.

Jen Arbuthnot, the university’s custodian of public records, wrote that portions of the documents were redacted because of FERPA, “which prohibits the University from releasing individually identifiable student records without their written permission.”

In KU’s investigation summary, all except one sentence of the “Findings” section was entirely redacted. The only sentence viewable by the public — “Based on the nine interviews conducted, the following information was found more likely than not to be true based on the information provided by the former new members:” — was an empty promise for information followed by three pages of blacked out details. 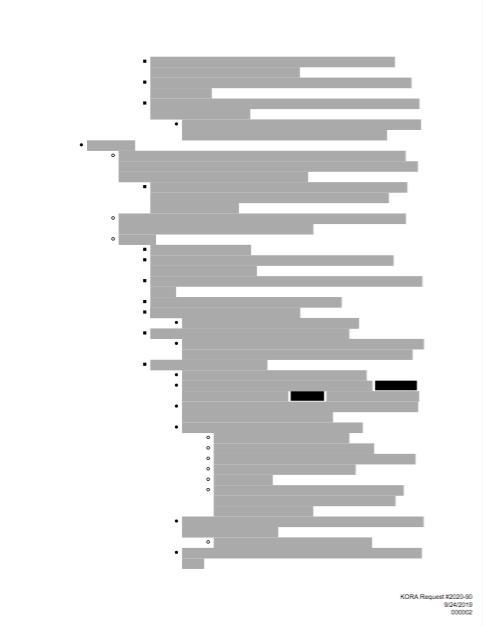 In documents requested from KU regarding Delta Upsilon’s termination from campus, the summary of the investigation was the most heavily redacted.

Lauren Bonds, legal director of the Kansas ACLU, said that FERPA is a valid reason not to disclose things and that, as a general matter, it’s good universities apply FERPA laws. But the question is, Bonds asked, are universities interpreting FERPA too broadly?

“It seems like more was withheld than maybe was necessary on this FERPA,” Bonds said. “Nothing surprising, but disappointing nonetheless.”

In an email to the Journal-World, university spokeswoman Erinn Barcomb-Peterson said KU errs in favor of privacy in order to protect students and to ensure KU is in compliance with the federal law, which trumps state laws requiring transparency.

“FERPA is not always clear, and the federal government has interpreted it very broadly, putting the university at risk virtually any time student information is requested,” she said.

Indeed, penalties for violating FERPA provisions can include the withholding of federal education funds. A spokesman with the U.S. Department of Education, however, wrote in an email that the department has never ceased providing federal funds to a university due to a FERPA violation.

Regardless, Lake said the Department of Education “has made it clear that they are serious about certain aspects of FERPA.”

A recent situation at the University of Oregon caused the department to specify that — save from two specific situations — universities should not release medical records of students, even to some parties that are involved in lawsuits related to the students.

“I think everybody got the message,” Lake said, noting that the letter made it clear the department is serious about protecting student privacy rights.

Barcomb-Peterson said providing documents to the public that have large amounts of redacted information is not the university’s preferred option.

“Frankly, it would be much easier for the university to simply provide reporters with unredacted records, but the federal legal standard guides the university’s actions and is the rule to which the university is attempting to adhere,” she wrote.

Bonds, the ACLU legal director, said she agrees that it is simpler for agencies to provide reporters with unredacted documents. But she doesn’t think it’s difficult for agencies to redact documents in large chunks. Where the difficulty lies, Bonds noted, is going through documents line by line, and choosing which parts to eliminate.

“I’m not sure if they really faced that burden here,” Bonds said of KU. 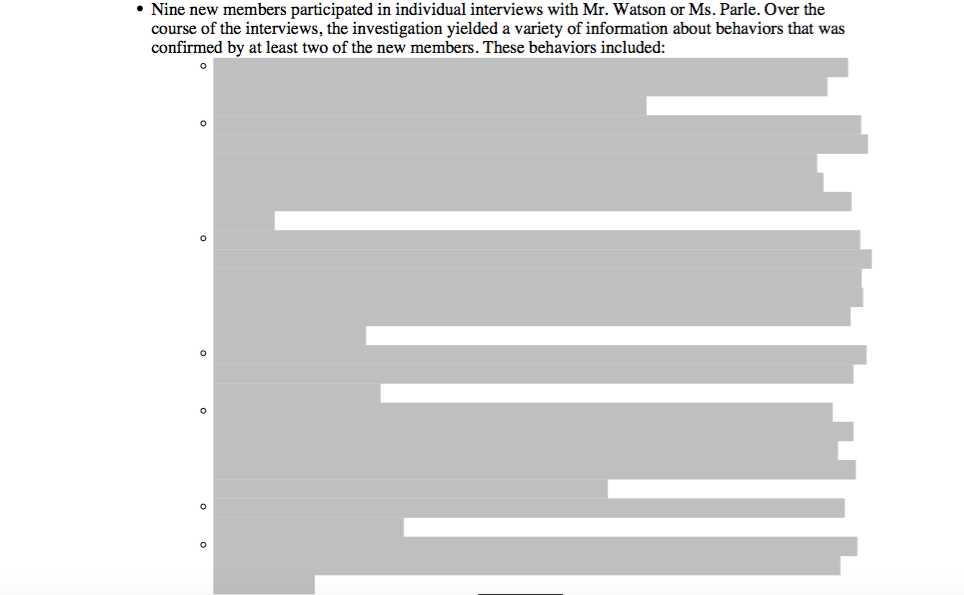 Documents requested by the Journal-World concerning the University of Kansas’ investigation into Delta Upsilon were heavily redacted.

It is a burden that the Kansas Open Records Act (KORA) seemingly requires. KORA does allow the university to withhold personally identifiable student information to comply with the provisions of FERPA. But it is to be liberally construed, said Max Kautsch, a Lawrence-based attorney who specializes in open-government issues. The portion of KORA that relates to the redaction of records is arguably ambiguous, he wrote in an email, but “any ambiguity is to be resolved in favor of disclosure.”

“As such, the university will be in compliance with KORA if it redacts only the information it is not authorized to disclose under FERPA, nothing more, and discloses the rest,” Kautsch wrote in an email to the Journal-World.

What is personally identifiable information?

2. The name of the student’s parent or other family members;

3. The address of the student or student’s family;

4. A personal identifier, such as the student’s Social Security Number, student number, or biometric record;

5. Other indirect identifiers, such as the student’s date of birth, place of birth, and mother’s maiden name;

6. Other information that, alone or in combination, is linked or linkable to a specific student that would allow a reasonable person in the school community, who does not have personal knowledge of the relevant circumstances, to identify the student with reasonable certainty;

7. Information requested by a person who the educational agency or institution reasonably believes knows the identity of the student to whom the education record relates.

The first five key points are specific, and the Journal-World did not seek to publish information such as student names, addresses, social security numbers or other such information.

After receiving the heavily-redacted report, the Journal-World did attempt to ascertain how much of the redactions were based upon the first five key points. In other words, of the presumably hundreds of words that were redacted in the document, how many of them were student names, addresses, social security numbers or other such information listed in the first five key points?

Barcomb-Peterson did not provide any new information, but rather simply resent the university’s initial statement on the matter.

Based on the Journal-World’s understanding of KU’s statement, KU appeared to attribute its redactions to Nos. 6 and 7 on the FERPA list, which deal with indirect information that could lead to the identification of a student.

Barcomb-Peterson said KU is more likely to rely on redactions in cases where an entire pledge class was subjected to hazing.

“Some fraternity hazing incidents involve events that happened to all members of a particular pledge class, meaning any details of those events can be identifiable to anyone who knows a member of that class — and many people on campus who read the Journal-World do,” she wrote. “However, where an individual student is hazed, or a small number of students are hazed, the University is often able to de-identify the records by redacting those names.”

Lake, the Stetson law professor, said he believes there are valid reasons that members of the public would want to know these details.

“I think the public has an interest in knowing if there are people on the campus that present imminent danger to others,” Lake said.

“I think that no one would assume it applies to everyone in that recruit class without them disclosing that,” she said, noting that there is “no way that the public would know for sure that this applied to the entire class.”

Lake was more hesitant. He called the whole situation a Catch-22, since all entities save from KU can only speculate as to what the redactions hide.

Lake believes FERPA is outdated and needs to be reformed, comparing it to an old chair one’s great-grandfather passed down the line that one doesn’t “dare throw away because it has been in the family for so long.”

Lake noted the restriction FERPA laws impart on the freedom of the press, and said it’s not something that’s just going to go away.