OSAGE CITY — Mandy Gibson remembers visiting independent pharmacies across Kansas with her classmates from the University of Kansas’ School of Pharmacy in the early 2000s.

Now, the 2002 KU alumna is the one providing similar memories for current students.

Gibson is the pharmacist at AuBurn Pharmacy in Osage City — the first stop on this year’s independent pharmacy tour. The tour is an annual event run by Gene Hotchkiss, senior associate dean in the School of Pharmacy.

“I’m always glad when (Hotchkiss) contacts me and wants to bring students out because I have very vivid memories of when I went on these trips,” Gibson said. “So it’s exciting to be able to perpetuate that with the next generation.”

This year’s tour will take 16 students to 13 independent pharmacies in central and southwestern Kansas. The tour has been an annual trip with the School of Pharmacy since 1998, Hotchkiss said. 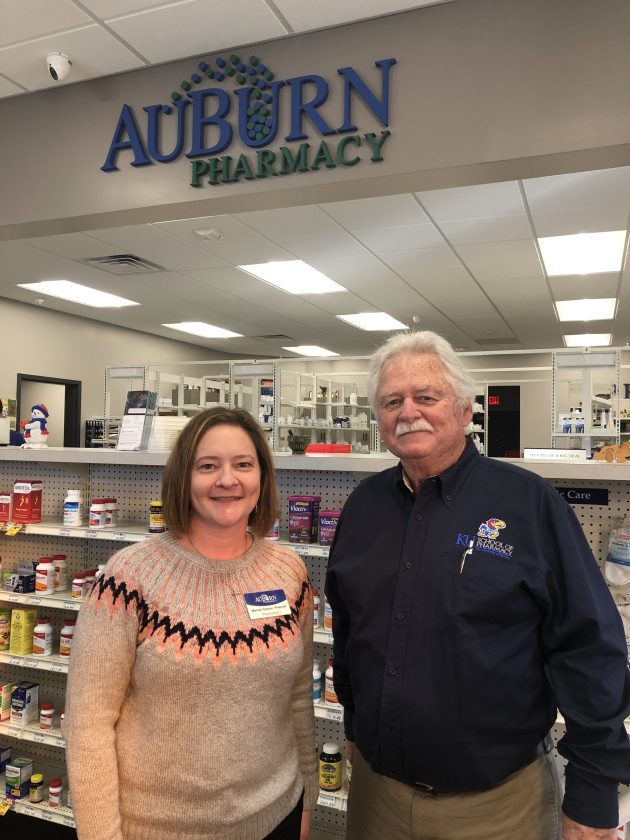 KU alumna and pharmacist Mandy Gibson with Gene Hotchkiss, senior associate dean with the KU School of Pharmacy and the organizer of the annual independent pharmacy tour, are pictured Tuesday, Jan. 7, 2020, in Osage City.

This year, Ronald Ragan, dean of the School of Pharmacy, accompanied the group, and the trip was sponsored by the KU Chapter of the National Community Pharmacists Association, which promotes independent pharmacy as a career option.

“We can talk to the students here and talk to them about independent pharmacy,” Hotchkiss said, “but what better way to just take them out and let them see it?”

Gibson greeted the current KU students Tuesday morning with doughnuts, orange juice and bananas, as well as a healthy dose of advice on topics such as business management, customer relations, community service and quality of life.

“I firmly believe you should support the community that you expect to support you,” Gibson told the students. “Don’t live in one town and try to work in another town and think that that’s going to work.”

She highlighted the importance of personal customer service. Her pharmacy does free deliveries in town and delivers to surrounding communities on certain days each week. Gibson also puts together personal “EZ Med” packs for some customers, which separates their monthly prescriptions out into individual pouches for what they need to take each day of the month.

“You’ve seen the commercials. Amazon is hitting hard,” Gibson said. “So we need to make them want to come here. Make it a good experience for them. Otherwise we are going to lose them.” 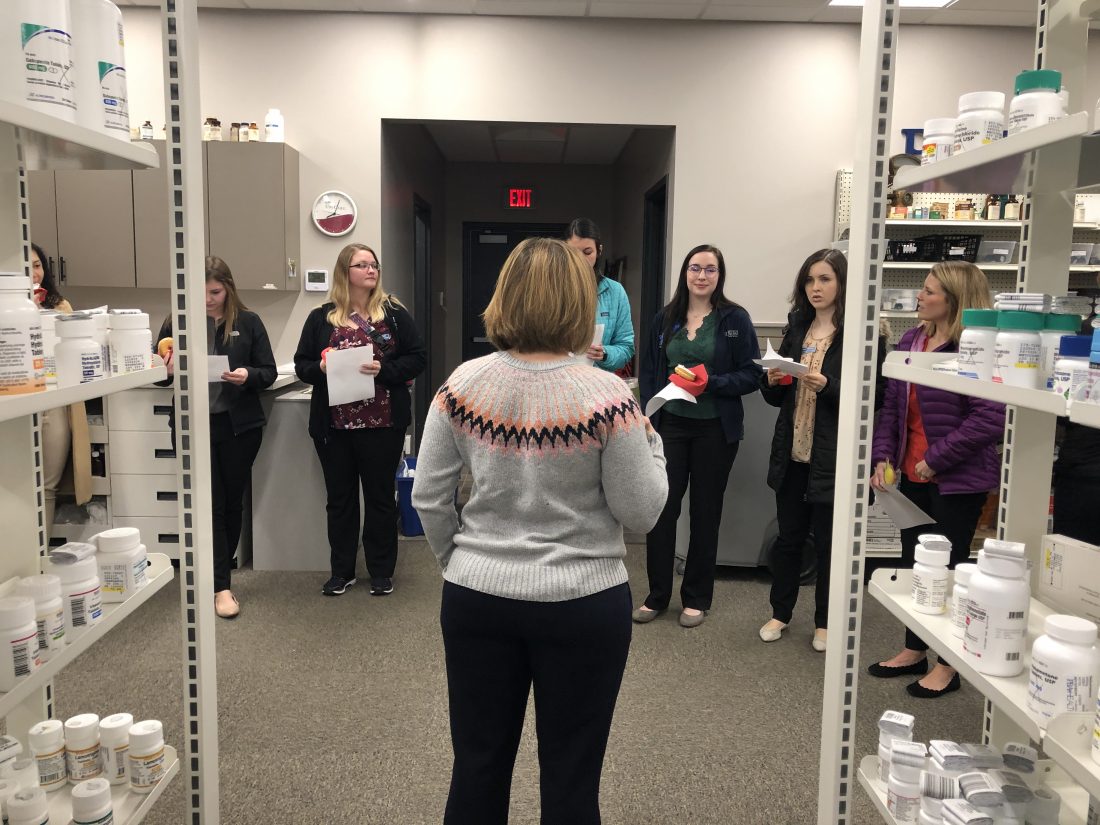 Pharmacist and KU alumna Mandy Gibson talks to current KU students about her job at an independent pharmacy in Osage City, Tuesday, Jan. 7, 2020.

Gibson said that many of her customers are elderly and do not have relatives in town. If she notices a regular customer has not been refilling an important prescription or has undergone a change in demeanor, she will reach out to a relative via phone to tell them what she’s observed.

Hotchkiss called the pharmacies on his tour “role model” pharmacies where the pharmacist is part of the community and satisfied with his or her career choice.

“I like to say that independent pharmacy is more than a career path. It’s a rich and rewarding lifestyle,” he said.

Compared with the situation about 10 years ago, when there was a shortage of pharmacists in rural Kansas, Hotchkiss said that a much healthier supply-and-demand balance existed currently.

“But with respect to making sure there’s succession of ownership in rural Kansas, this road trip helps that by establishing these networking relationships,” he said. “Part of the focus of this program is to let students see the opportunities that are available in rural Kansas.”

Angela Baalmann, a third-year pharmacy student from Andover, said she was impressed with but not surprised by Gibson’s dedication to her work.

“Being the only pharmacist, I think, would be extremely challenging,” she said. “I think what caught my attention is how hard of a worker she is — how she really puts her whole life into this pharmacy, which means she must be passionate about it.”

Second-year student Sara Strand, from Overland Park, said she took note of how long Gibson’s staff members have remained in the pharmacy. She said usually there was a high turnover rate.

While Baalmann said she didn’t think she’d go into independent pharmacy, Strand said, “I just can’t see myself anywhere else.”