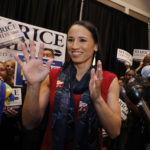 Davids, one of the first two Native American women to serve in Congress, will deliver a speech at 6 p.m. Oct. 8 in Woodruff Auditorium at the Kansas Union. Davids is a member of the Ho-Chunk Nation.

Jennifer Ng, interim vice provost for diversity and equity, said in a news release that she was pleased that KU was able to bring Davids to campus.

“This region has enduring ties to Native Americans and Indian Country, and it’s fitting that we take time to celebrate the many contributions of Native Americans as well as reflect on and acknowledge America’s grim history with regard to native communities,” she said. “We have opportunities to learn and grow as individuals and as a community.”

Indigenous Peoples Day is on Oct. 14. KU has a variety of events planned from Oct. 8 to Oct. 27. The full schedule can be found online and includes an indigenous women’s art exhibit at KU’s Spencer Museum, a quillwork demonstration and a screening of indigenous short films. The events are co-sponsored by Haskell Indian Nations University.