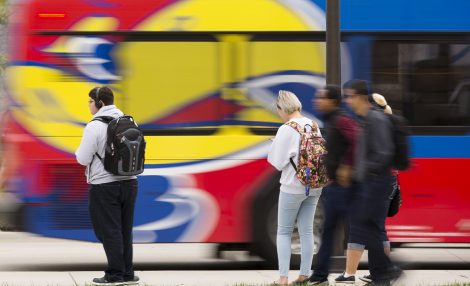 A bus whirs by as University of Kansas students wait along Jayhawk Boulevard on Wednesday, Oct. 12, 2016.

The University of Kansas’ standing among public universities improved by two places per U.S. News & World Report’s 2020 rankings, released on Monday. KU came in at No. 59.

Among national universities — designated as public or private institutions that offer a full range of undergraduate courses as well as master’s and Ph.D. programs — KU was tied for No. 130.

“We recognize the importance of these rankings, and we always would prefer to go up,” said Chancellor Douglas Girod in a news release. “However, we remain focused on a broader set of metrics to measure our success, and we will be refining those further through a new strategic planning process that will be launching soon.”

More than one third of a school’s ranking comes from its ability to retain and graduate students within six years. U.S. News cites this as the most important factor because “degree completion is necessary to receive the full benefits of undergraduate study from employers and graduate schools.” The rest of an institution’s ranking is based off the following factors: faculty resources, expert opinion, financial resources, student excellence and alumni giving.

“The work done by our KU faculty and staff is ensuring more of our students remain on track to advance in their degree programs and ultimately graduate,” said Carl Lejuez, interim provost and executive vice chancellor, in the release. “When we can improve in those areas we know are important, success in rankings will typically follow.”

Out of all national universities, KU came in No. 91 for “Best Colleges for Veterans,” No. 116 in “Best Value Schools” and No. 83 in “Best Undergraduate Engineering Programs.”