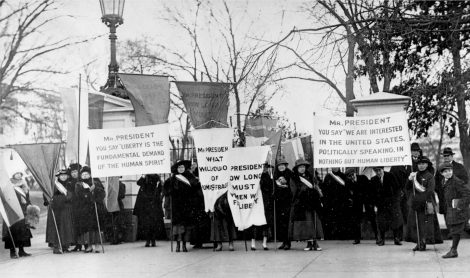 In celebration of the centennial of the 19th Amendment, the University of Kansas is hosting a series of women’s suffrage events for the 2019-2020 school year.

The Centennial Celebration will educate people about women’s suffrage, celebrate the progress that has been made and emphasize the importance of every citizen’s right to vote.

Teri Finneman is the lead organizer of the celebration and an assistant professor of journalism at KU. She said it was important for the campus to “take an active role in the anniversary” and that she hoped the wider Lawrence community would join conversations about the struggle for rights.

“One hundred years ago, the suffrage movement was not as inclusive as it should have been,” she said. “We should do better to make sure our events have different voices at the table, and we want to hear from a variety of ages, races and countries. Men can’t be left out either. We hope men will come out to these as well to be supportive of their daughters, sisters, significant others and mothers.”

Excepting the theater performances, all events are free and open to the public. Here’s a list of events occurring this semester. Nine more will take place throughout the spring.

Brittney Cooper, author of “Eloquent Rage: A Black Feminist Discovers Her Superpower,” is a writer, teacher and public speaker. She has written on representations of black women in popular culture and studied how black women have theorized racial identity and gender politics. Tickets for her speech are free but should be acquired ahead of time online.

Hall Center for the Humanities Lecture Series: “Sovereignty of the Soul: Centering the Voices of Native Women”

Sarah Deer, a KU professor in the department of Women, Gender & Sexuality Studies, is an activist for the rights of indigenous women and will be delivering this address. Her work focuses on the intersection of federal Indian law and victims’ rights.

“Women Making (And Breaking) the Law”

Genelle Belmas, associate professor of journalism at KU, will discuss the importance of women in and to the law.

This is a two-day event. Thursday night, historian Sarah Bell will deliver an address titled “Politics on the Platform: Woman Suffrage At The Chautauqua.” Friday night, Diane Eickhoff will discuss her book “Clarina Nichols: Frontier Crusader for Women’s Rights.” Both events will occur at 7 p.m.

KU Theatre & Dance: “In the Blood”

This play, directed by graduate student Timmia Hearn, is loosely inspired by Nathaniel Hawthorne’s “The Scarlet Letter.” It tells the story of a mother of five living in poverty beneath a bridge.

“It Didn’t End with the Vote”

It wasn’t until decades after suffrage that women gained rights in areas such as finances, the workplace and education, as Lisa McLendon will discuss. McLendon is the director of the Bremner Editing Center and news and information track chair at KU’s journalism school.

“From Suffragettes to Soccer Moms: Women Voters since Suffrage in Rhetoric and Reality”

Christina Wolbrecht, co-author of “Counting Women’s Ballots: Female Voters from Suffrage Through the New Deal,” will speak about women voters since suffrage.

This play about a girls’ soccer team portrays teenage girls getting to know one another and themselves during a series of pregame warm-ups.