‘Crochet Lady’ more than her meme-moniker; she’s a KU senior who hopes to become a nun 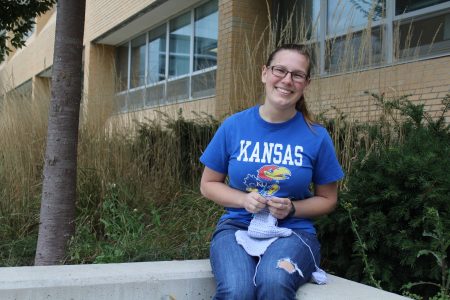 Hailey Solomon, known for a brief stint as "Crochet Lady," crochets on Oct. 21 outside the School of Engineering building at the University of Kansas.

It was Hailey Solomon’s first KU football game, and ESPN captured about 10 seconds of her experience on video.

There she was, in a red sweater and puffy coat, the stands empty around her, crocheting. Of course, Solomon was simply occupying herself during the rain delay, but that was hardly important to the 1.4 million people who viewed the viral video, many of whom took the opportunity to joke that KU football must be especially boring.

“College football is ELECTRIC,” ESPN tweeted with the video.

For days, Solomon was simply known as “Crochet Lady.” But when her identity was discovered, she was revealed as much more than her meme-moniker. 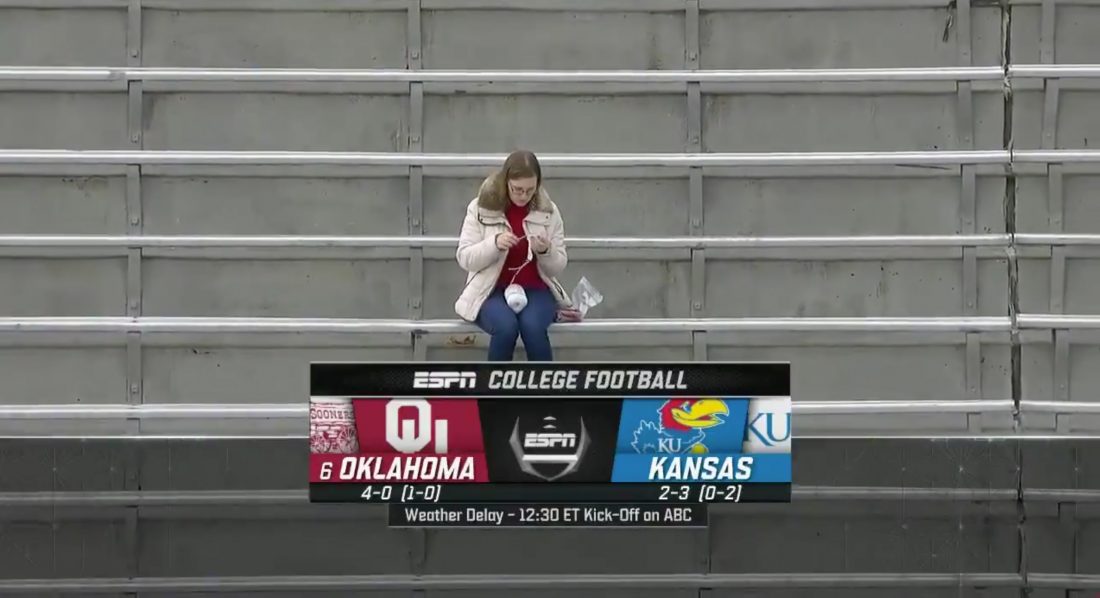 A screenshot from an ESPN broadcast shows a woman crocheting before the University of Kansas’ home football game against Oklahoma, Saturday, Oct. 5, 2019.

Solomon, 21, is a KU senior studying civil engineering who, yes, has a passion for crocheting, but also has a devotion to others that is revealed in many aspects of her life. She hopes to become a nun when she’s done with school.

Solomon was at the football game to support her favorite professor, Matt O’Reilly, who received the HOPE Award, in the first quarter. She had never been to a game before and doesn’t plan on going to one again.

“I like to think that I can understand basic football, but I figured out that I can’t because I didn’t know which direction we were going the first 10 minutes,” she said.

She was content sitting alone before the game — a friend later joined her — because, “I loved what I was doing and I was content and OK to do it by myself,” she said.

She decided not to sit in the student section because she knew it would be “overwhelming” and that she would have a better view of O’Reilly receiving his award elsewhere. Solomon was one of the students who nominated O’Reilly for the outstanding progressive educator award, given yearly to a faculty member from KU’s senior class.

“Oh my gosh. Dr. Matt O’Reilly is one of the most influential and important people in my life,” Solomon said.

In her nomination letter, Solomon told how O’Reilly drove to campus on a Saturday to explain something “because, as he put it, it was better expressed in person.”

As her first faculty adviser, O’Reilly assured Solomon that she could succeed in the engineering department, despite her fears that she would fall behind classmates because of her lack of AP credits and the fact that she grew up in a small town: Oswego, Kan. Her junior year, she had him as a professor.

“I thought he couldn’t be a better professor than he was an adviser, but he was,” she said. “All of his passion flooded into us, and it was such a joy to be his student.”

Solomon said that most professors had a handful of “office hours” (she used hand quotes) but that O’Reilly had an open-door policy, and “has probably like 30 office hours a week because he always just says, ‘You can stop by anytime.'”

In a phone interview, O’Reilly added, “My door is sometimes open even when I’m not in there. I need to be better about that.”

In the seconds Solomon was captured on ESPN for the world to see, she was working on a potholder for another deserving acquaintance, her lab coordinator, whom she described as “one of the nicest and most hardworking people I’ve ever met.”

And when Solomon accidentally became internet famous in those casual crocheting moments, she later regretted that the spotlight had veered to her when she wanted it all on her professor. But O’Reilly said he was thrilled Solomon, whom he called an amazing, cheerful student, also got some recognition.

“She didn’t steal any of the thunder,” he said. “ESPN wasn’t going to cover the HOPE Award anyway.”

O’Reilly is also happy that the brief stardom is allowing Solomon the opportunity to plug her campus club, Warm the World. Solomon started it her sophomore year with two friends. At their weekly gatherings, members learn how to crochet or knit, and everything they make they donate to the homeless to keep them warm in winter. They currently give their items to the Lawrence Interdenominational Nutrition Kitchen.

After graduation, Solomon hopes to enter religious life and become a Catholic nun.

But for right now, she’s just happy that after “a little bit of ruckus for about a week,” the aftermath of “Crochet Lady” is in the past.

“Honestly, there has not been a lot of hubbub, which I’m OK with,” she said. “I have so much homework.”