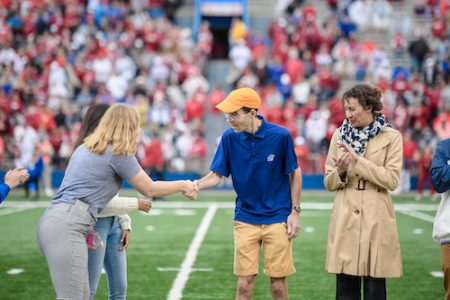 Matt O’Reilly, an associate professor in the Department of Civil, Environmental and Architectural Engineering at the University of Kansas, has been selected as the 2019 recipient of the HOPE Award.

HOPE stands for “Honor for Outstanding Progressive Educator.” It’s the only award given to a faculty member by KU’s senior class.

In a nomination letter, a student told how O’Reilly drove to campus on a Saturday to explain something “because, as he put it, it was better expressed in person,” according to a news release from KU.

O’Reilly, a KU alumnus, is known by some as “Dr. Matt.” He has been a member of the faculty since 2011. He researches corrosion, durability of materials and bond strength of reinforcing steel. He advises the concrete canoe team and Engineers Without Borders.

O’Reilly said he was “incredibly honored” to receive the award.

“To have the students I’ve worked with come together and say that they appreciate what I do to this extent has left me awestruck and speechless,” he said in the news release. “I’m grateful to all of them and am happy to continue teaching at KU.”