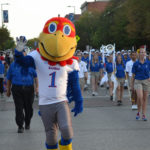 Big Jay waves at the crowd during the KU homecoming parade on Massachusetts Street on Thursday, Sept. 27, 2018.

The University of Kansas’ 107th Homecoming week kicks off Saturday and concludes a week later, the day of the football game against Texas Tech University.

This year’s theme is “Far Above the Golden Valley.”

“As a former student athlete, I’m super excited to be working on Homecoming,” said Stowers, a two-time captain of the KU football team who graduated in 2015.

He said it was “fulfilling” to now plan Homecoming for KU as a staff member and that it’s exciting to “continue to engage our university.”

All events are open to the public, Stowers said, but some only in a viewing capacity. The “Chalk & Rock” event, for example, is only for student groups and campus organizations to participate in, but anyone can view their chalk creations outside Wescoe Beach Tuesday afternoon.

Stowers said he’d be happy to see their six months of work planning Homecoming events come to fruition, “but as an event planner, you check the box and move on to the next event.”

Participants can enjoy food from the restaurant partners of the Student Alumni Network (among them: Jefferson’s wings and Papa Keno’s pizza) while listening to live performances by KU bands. Free Homecoming T-shirts will be available.

Student groups and campus organizations have the day to decorate their home on campus according to the Homecoming theme. Judging will take place at 5 p.m. and winners will be announced later in the evening on social media.

This historic Homecoming event involves student groups and campus organizations creating chalk murals that represent themselves and the Homecoming theme on Wescoe Beach.

Student groups will compete to create the best Jayhawk-themed skits or musical performances.

This dedication ceremony will highlight the National Pan-Hellenic Council chapters at KU.

Enjoy hot chocolate and cider in a free mug of your choosing from over 500 options.

This event is only for first-year students enrolled in UNIV 101 classes. KU alumni will discuss their first years at KU.

This biennial two-day event features a campus bus tour, a meet-and-greet with Girod, an awards reception and a tailgate hosted by the men of Kappa Alpha Psi Fraternity, among other events.

The parade will take place on Massachusetts Street in downtown Lawrence. It will begin at South Park and end at Seventh and Massachusetts.

At halftime, three Homecoming awards will be presented to outstanding students and alumni.