‘I don’t want to write another book about rape’: KU professor, advocate for Native women delivers lecture on ‘sovereignty of the soul’ 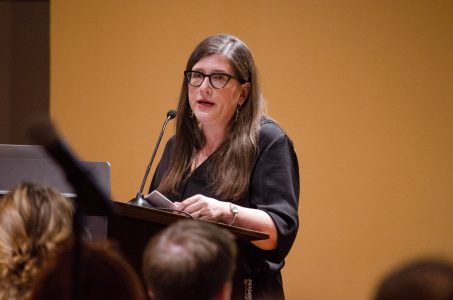 Sarah Deer discusses “Sovereignty of the Soul: Centering the Voices of Native Women” as part of the Hall Center for the Humanities Lecture Series on Tuesday, Oct. 1, 2019, at Spooner Hall.

This statement was met with silence from the packed audience in Spooner Hall attending Deer’s Hall Center for the Humanities lecture Tuesday evening.

Deer, a lawyer and University of Kansas professor whose scholarship focuses on the intersection of tribal law and victims’ rights, titled her lecture “Sovereignty of the Soul: Centering the Voices of Native Women.”

“I think it’s really important to talk about this word ‘sovereignty,'” Deer said toward the beginning of her lecture, urging the audience to think about the term more broadly than its political context.

“I believe there’s another layer to sovereignty. One of a personal nature,” she said. “One of the sense of self such that you make the decisions about what happens to you and what happens to your body. And that sovereignty has also been denied to people who have been victims of sexual violence.”

Deer is a citizen of the Muscogee (Creek) Nation. She was named a MacArthur “Genius” Fellow in 2014 and was inducted into the National Women’s Hall of Fame this year, the fifth Kansan in history to receive the honor.

“Important though it is for research universities such as KU to bring in guest speakers from across the country and around the world, it is I think equally important to highlight the outstanding work being done by faculty right here on campus,” Hall Center director Richard Godbeer said in his introduction.

Among Native women, 84.3% have experienced violence and 56% have experienced sexual violence, Deer shared with the crowd, citing a study funded by the National Institute of Justice. Deer has visited over 100 Indian reservations and communities in her work and said she has never heard anyone dispute the second statistic.

“In fact, many say, ‘I think that’s probably a low estimate,'” she said. “And the hardest thing to hear is when you hear mothers or grandmothers say, ‘I don’t know any women in my community who haven’t been raped.'”

But one’s sovereignty can also be threatened in other ways. Deer said she sees Native women struggling with “the fact that we are either erased, or ignored, or appropriated, or stereotyped, or dehumanized, or victimized, or idolized, or pitied, and sometimes all at once. And all of these things deny our humanity.”

Deer highlighted Native women’s involvement in the women’s suffrage movement in the early 20th century. She also offered brief biographies to the crowd of prominent Native women from the last couple of centuries, in order to offer a “counter narrative.”

“We are portrayed in the distant past as though we have disappeared,” Deer said of Native women. Most Americans can only name two: Pocahontas and Sacagawea.

One of Deer’s current projects involves interviewing Native women who have been victims of sexual violence and asking them what they want out of the tribal justice system. Deer is trying to think of alternate responses to mass incarceration, which she called a “problem.”

“When you work with tribal nations, there’s a real luxury in some ways, because many of us have not had rape laws very long,” she said. “Some tribes have only recently had a rape law, and some don’t have one at all yet. Now, what that means is that we get to start from scratch.”

Deer is too early on in her research to share her results from the conversations she has had with over 50 Native women.

Deer is also working on a book. But, “I don’t want to write another book about rape,” she said. “I really don’t.” (Deer’s latest book was “The Beginning and End of Rape: Confronting Sexual Violence in Native America.”) She wants to focus on the intellectual lives of Native women in the 21st century.

“We are truly in a new and exciting era and I hope that the images of Native women now are cloaked in dignity and in beauty and in power,” she said.

In a question-and-answer session following her lecture, one attendee asked Deer if it was difficult to find joy in her work, and Deer responded that she is able to.

“The biggest joy that I get is when somebody calls me and says, ‘You know, today is the first time I laughed since it happened.’ And that’s where I find the joy, is in trying to put the pieces back together and being allowed to come on that journey with people,” she said.

Tiana Martinez, a sophomore at Haskell Indian Nations University who attended the lecture, said it was inspiring to hear a Native woman “speak with such a strong, clear voice.” Martinez has a speech impediment.

“Someday, I’ll be speaking too,” she said.

Editor’s note: The first paragraph of this story has been revised to reflect what Deer has heard from other Native women.