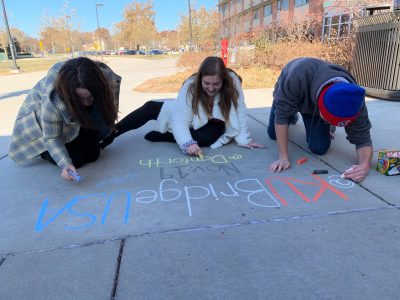 Most universities have clubs for young Democrats and Republicans, but a growing number, including the University of Kansas, are establishing chapters of BridgeUSA, a national organization that seeks to expose students to diverse ideological viewpoints.

Jakob Moberly, a KU sophomore who is KU’s chapter president and founder, said he noticed throughout his first year at college that viewpoints were often met with anger by those who thought differently.

“For me, and for all of us, this isn’t what this country should be doing to us as growing, educated citizens,” he said in an email. “Instead, we should be working together to find reasonable solutions to some of our growing issues that pass in and out of our lives every day.”

BridgeUSA grew from a club founded by a student at the University of Notre Dame into a national organization. While KU’s chapter is not listed on the organization’s website, Manu Meel, chief executive officer of Bridge USA and a senior at the University of California, Berkeley, confirmed in an email that KU is a BridgeUSA chapter. He noted that the website is undergoing a “major overhaul” and said BridgeUSA currently has 25 chapters.

The mission of BridgeUSA, according to its website, is to work with “America’s future leaders on college campuses to foster spaces wherein a diverse range of ideas can engage one another through the practice of responsible discourse.

KU’s chapter will have its first meeting Tuesday. Moberly said the topic would be “Politics: Can We Talk?”

Future topics will be “Gun Rights: To Use, or Not to Use?” and “The Cold Truth About Global Warming.” The group hopes to meet once a month.

Moberly started the chapter with his friends Tessa Worner and Aneka Zarger, whom he met in his first year at KU through their shared majors in music therapy. Worner and Zarger have since switched majors.

Moberly heard about BridgeUSA through an organization called the Heterodox Academy, a group that describes itself as a nonpartisan collaborative of university professors, administrators and graduate students that promote open inquiry, diverse viewpoints and constructive disagreement on college campuses. On its website, Heterodox Academy states that undergraduate students can help its mission by joining or starting a BridgeUSA chapter on their campus.

Moberly, who attended a BridgeUSA leadership summit in October, said he was excited that KU would help represent the Midwest.

“As we are the first and only chapter in Kansas, we are in an ideal location to be a central hub between the East and West Coast,” he said.

He also said all students should feel comfortable joining the conversation.

“The purpose of this organization,” he said, “is to bridge the gap that we have in politics, so you could say that it functions as a middle ground in that all parties and ideas are welcome.”