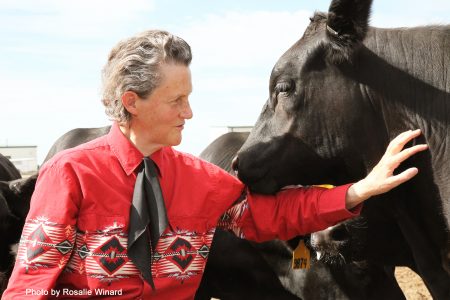 photo by: Photo by Rosalie Winard

Animal welfare expert and autism advocate Temple Grandin is the 2019 recipient of the University of Kansas' Dole Institute of Politics Leadership Prize. She will be in Lawrence to accept the prize on Dec. 11.

A renowned animal welfare advocate has been chosen to receive the 2019 Dole Leadership Prize.

Temple Grandin, a professor of animal science at Colorado State University, is well known for her expertise in animal welfare, as well as her advocacy for people with autism. Grandin herself was diagnosed with autism when she was 2 and did not speak until after she turned 3.

“She not only overcame widespread ignorance about autism and helped lessen the stigma around it, she used the challenges she faced to bring an entirely new perspective to how domestic animals are cared for and treated,” he said in a news release.

In a 2010 Ted Talk called “The world needs all kinds of minds,” Grandin talks about how she thinks in pictures and how this helped her in designing cattle-handling facilities.

“In my work with cattle, I noticed a lot of little things that most people don’t notice would make the cattle balk,” she said, specifying things such as a waving flag, a hose on the floor or a hanging chain.

“In the early ’70s when I started I got right down in the chutes to see what cattle were seeing, people thought that was crazy,” she said.

Grandin was one of TIME Magazine’s Top 100 most influential people in 2010. That same year, HBO released a semi-autobiographical movie about her life called “Temple Grandin,” starring Claire Danes.

Grandin will accept the award, which comes with a $25,000 cash prize, on Dec. 11 at 7 p.m. at the Dole Institute, 2350 Petefish Drive. The program will be free and open to the public. For those who cannot attend, a livestream will be available online at doleinstitute.org.

According to a spokesman from the Dole Institute, the program will include a question-and-answer session. Grandin will first field questions from Lacy, then from the audience.