‘A future KU may be a smaller KU, but a stronger KU’: At ‘Visioning Day,’ Girod kickstarts strategic planning process 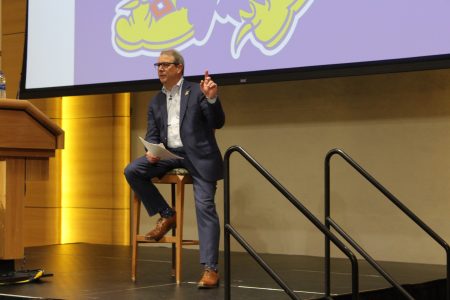 At a strategic planning kickoff event, University of Kansas Chancellor Douglas Girod said that while the state of higher education looks bleak, KU is in a good position to deal with the difficult landscape.

Girod noted that universities in Kansas face many challenges, including population decline in parts of the state and the Midwest region, drops in international student enrollment and the perception that higher education is losing its value. But despite that, Girod said he was optimistic:

“Overall, I think we as a university are better positioned than certainly anybody in the state of Kansas, but very possibly anybody in the region, to be successful in the environment in which we live,” he said.

“A future KU may be a smaller KU, but a stronger KU.”

Girod spoke for 30 minutes to begin the event. He drew attention to several pressing issues KU has to face — leadership turnover, population declines in many parts of the state and region and the “painful” budget realignment — but said he’s confident the university can overcome them.

“And you may find it odd, but I’m actually really optimistic about where we’re going,” he said.

Girod noted KU’s stable tuition rate this year, an increasing number of first-generation and minority students, a solid endowment and the first increase in state funding in over a decade as some of the university’s current successes.

Although Friday’s event was styled as a kickoff, discussions concerning KU’s mission and vision began in September. During the rest of 2019 and the beginning of 2020, the strategic plan will be hashed out in more specific detail, according to Girod’s presentation. The plan is expected to be finished by May.

Girod also touched briefly on the university’s new budget model in his presentation.

“We’ve worked to roll out the new budget model,” he said. “Is it perfect? Probably not — none of them ever are — but it’s a step in the right direction and we’re going to have to live with it for a few years.”

Girod said the strategic planning process will likely help the university think about how that budget model needs to be modified in the years to come.

He also said the strategic plan would be a “living document,” not one that is static.

Girod said the university will use its own faculty and staff to develop the plan, and that it will not hire an outside consulting firm. He also said the university needs to start thinking about its next fundraising campaign, which he expects will be “closely aligned” to the strategic plan.

The event culminated in facilitated discussions, where attendees — who were grouped at tables — responded to the following questions: “What are the characteristics of KU at its best self?” “What are the barriers to reaching our best KU?” and “What opportunities can help KU be its best self?”