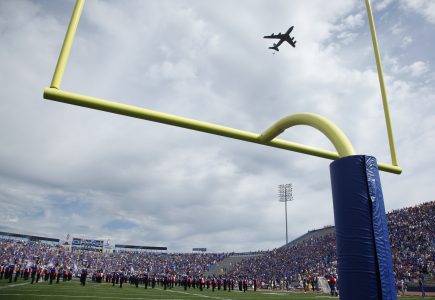 In this file photo from Sept. 11, 2010, a military KC-135 tanker flies over Memorial Stadium before a University of Kansas football game.

A military plane is scheduled to fly over the University of Kansas at Saturday’s home football game, according to a news release Friday from KU.

One KC-135R military refueling aircraft, from the 155th Air Refueling Wing of the Nebraska Air National Guard based in Lincoln, is scheduled to fly over before the 2:30 p.m. kickoff of the game at David Booth Kansas Memorial Stadium.

The Jayhawks will host Kansas State for the Dillons Sunflower Showdown.