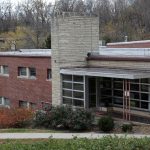 Oldfather Studios, at 1621 W. Ninth St., is pictured here on Thursday, Nov. 9, 2010. Gov. Laura Kelly signed a budget bill on Monday, May 20, 2019, giving the University of Kansas authority to sell the vacant facility.

An old University of Kansas facility will soon be on the market.

On Monday, Gov. Laura Kelly signed a budget bill that provides $18.3 billion of state government funding, including a $33 million increase of funding to higher education. Along with the budget, the bill included a provision giving KU the authority to sell Oldfather Studios, a building that formerly housed the university’s Film and Media Studies Department but that has been vacant since 2017.

The governor’s approval comes after the Kansas Board of Regents signed off in January on the university’s request to sell the building. Erinn Barcomb-Peterson, a spokeswoman for the university, said the provision gave KU the authority to sell it after July 1.

“It is likely to be a competitive process to sell (the property),” she said.

The two-story brick building, at 1621 W. Ninth St., features 18,000 square feet of space. While it was in use, it featured a sound stage, sound and editing suites, screening rooms and classrooms.

In a February letter sent to the House appropriations committee, KU’s chief financial officer Diane Goddard said the university was looking to sell the facility because it was away from campus and was in poor condition. She said fixing the issues at Oldfather would cost nearly half of the replacement value of the building and selling it would remove a financial liability for the university.

The university anticipates selling the property for about $800,000, which would be allocated to KU’s deferred maintenance projects on the Lawrence campus, Goddard said in the letter.

The building was constructed in 1955 and previously was home to Centron Corp., a leading industrial and educational film studio. The company had dissolved by 1990, and KU Endowment purchased the building in 1991 with a gift from Charles and Hortense Oldfather. The KU Film and Media Studies Department used the facility until 2017, when it moved to Summerfield Hall, 1300 Sunnyside Ave., after a $10 million renovation.