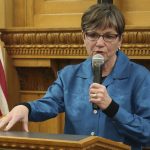 Kansas Gov. Laura Kelly speaks to reporters during a news conference, Friday, May 10, 2019, at the Statehouse in Topeka, Kansas. (AP Photo/John Hanna)

Kelly said in a message to legislators that she used the governor’s power to veto individual items in the budget to excise “non-essential” spending in several provisions and bolster the state’s cash reserves. The rest of the spending blueprint includes more than $18.3 billion for state government for the budget year beginning in July, a record amount.

Legislators included the extra $51 million for the Kansas Public Employees Retirement System to help make up for shorting the state’s annual contributions in recent years, when the state repeatedly faced budget problems. But Kelly called it “imprudent” when other parts of state government still need extra dollars, despite extra spending in the budget.

“When I built my state budget proposal, it was tempting to approve every spending request made by agencies and organizations because all had endured severe budget cuts in recent years,” Kelly said. “But I felt that fiscal restraint was absolutely critical to sustaining Kansas’ recovery.”

Republican legislators were expected to try to override Kelly’s veto of the pension payment and perhaps several other items, though it was not clear they could muster the necessary two-thirds majorities in both chambers. Senate President Susan Wagle, a Wichita Republican, said Kelly had “turned her back” on teachers and state employees.

“Instead of protecting the retirement of hardworking Kansans, Laura Kelly would rather pocket the money to fund her big spending agenda,” Wagle said in a statement.

The budget includes pay raises for state workers, as well as extra spending on prisons, social services and higher education. Lawmakers also increased spending on public schools, and the budget would boost overall state spending by 6.6 percent, or nearly $1.14 billion.

Kelly has clashed with Republicans over how best to deal with a shortfall in the longer-term funding for the state’s public pension system. A 2012 law set an aggressive schedule of increasing state contributions to eliminate the gap by 2035, and Kelly argues that it’s unrealistic. But legislators in both parties rejected a proposal from her to restructure the annual payments.

The governor also vetoed an extra $1.9 million in funding for community mental health centers. And she rejected earmarking $1.5 million for specific programs in the Department of Education budget, saying local school districts should use new state dollars for programs that they “deem appropriate.”

“There is a lot to celebrate in this state budget,” Kelly said. She added later, “I am confident we are headed in the right direction.”