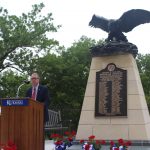 University of Kansas Chancellor Douglas Girod speaks on Monday, May 20, 2019, during a rededication ceremony of "The Victory Eagle" sculpture, a World War I memorial honoring Douglas County residents who died during the war.

For the third — and likely final — time, the University of Kansas on Monday dedicated “The Victory Eagle” statue in honor of the Douglas County residents who lost their lives fighting in World War I.

“Monuments like this ‘Victory Eagle,’ commissioned to honor those from Douglas County who answered their country’s call, makes this world history our local history,” said Lorie Vanchena, who is a KU associate professor of German Studies. “Eighteen of the 68 individuals whose names appear on the plaque were KU students and alumni. So this monument makes this world history our university history.”

The university rededicated the World War I commemorative statue because it was moved to a new location on the east side of Memorial Drive in April. The statue was previously displayed on Jayhawk Boulevard near the front of Dyche Hall but was moved closer to other war memorials on campus.

The bronze eagle statue, which had been sitting in front of Dyche Hall since 1982, depicts a female bald eagle defending her nest. The sculpture was originally placed on the Douglas and Leavenworth county line in 1929 but was removed in 1980 because of vandalism. The sculpture was rededicated on KU’s campus two years later.

The KU sculpture is one of six eagle statues produced in the 1920s to be placed along “Victory Highway,” a planned roadway from New York to San Francisco that was meant to honor those who died in WWI, but the plan was never fully realized.

The sculpture now sits in a small plaza with seating that overlooks the large green space of Marvin Grove.

Along with the Campanile bell tower, which is a World War II memorial, the university displays Korean War and Vietnam War memorials on Memorial Drive. Nearby, the university also has the David Booth Kansas Memorial Stadium, home of the KU football team, and the Kansas Union, both of which honor KU students who died in World War I. 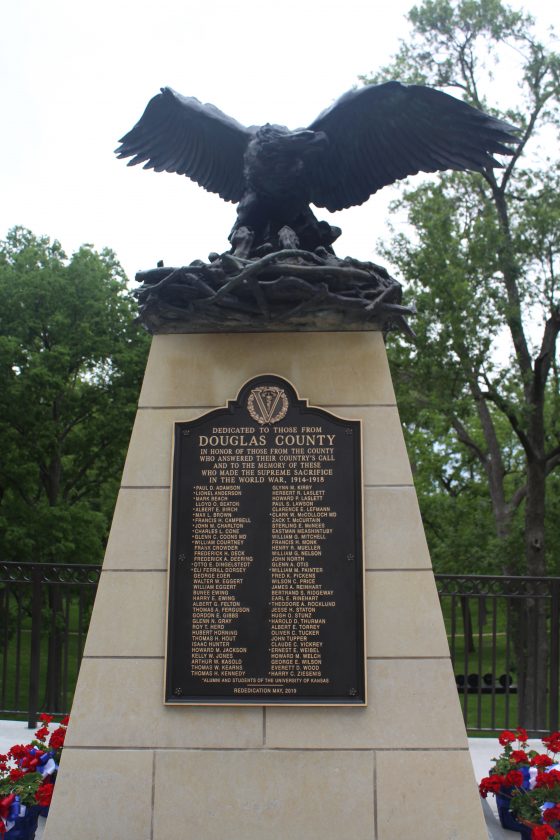 “The Victory Eagle” sculpure, a World War I memorial, sits in its new location on Memorial Drive on Monday, May 20, 2019. The sculpture previously sat on Jayhawk Boulevard in front of Dyche Hall.

Warren Corman, who is a World War II veteran and previously served as the university architect for KU, came out to the ceremony to see the rededication. As the previous architect he helped design the Korean War Memorial, which was dedicated in 2005, and he’s happy to see “The Victory Eagle” join the neighborhood.

“It’s great,” he said of the new location. “This is a beautiful spot for it.”

KU Chancellor Douglas Girod, who served in the Navy, said the rededication commemorates the fallen soldiers, but it also highlights the end of the university’s Memorial Drive renovation, which began in 2016 and included road and parking improvements.

“(This project) has turned out so beautifully and our team has done such a great job with that and really, not only beautified and added safety to this portion of campus, but has really made it possible for more people to enjoy several memorials we have on this drive,” he said.