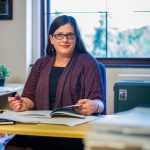 KU professor Sarah Deer will be the fifth Kansan inducted to the National Women’s Hall of Fame in Seneca Falls, N.Y. She will be following Amelia Earhart, Gwendolyn Brooks, Jean Kilbourne and Ruth Patrick.

University of Kansas professor Sarah Deer will be inducted into the National Women’s Hall of Fame this year, the organization has announced.

Deer has a joint appointment with the KU School of Public Affairs and Administration and the Department of Women, Gender and Sexuality Studies. She is a citizen of the Muscogee (Creek) Nation of Oklahoma, and as a lawyer and advocate, she has worked to end violence against women, with her scholarship and public policy work often focusing on indigenous women, according to a news release from the hall of fame.

She is being recognized in particular for her work that led to the passage of federal laws, including the Violence Against Women Act and the Tribal Law and Order Act, as well as her advocacy around issues of sexual assault and domestic violence in indigenous communities, according to a release from KU. Deer was previously named as a prestigious MacArthur Fellow in 2014.

The National Women’s Hall of Fame is located in Seneca Falls, N.Y., and it “tells women’s stories by focusing on the leadership lessons from its inductees throughout American history,” according to the hall’s release. It opened in 1969 and will celebrate its 50th anniversary and the 100th anniversary of women’s right to vote in New York with an induction ceremony Sept. 14 in Seneca Falls.

Deer and nine other inductees in the 2019 class, which includes actress and activist Jane Fonda and U.S. Supreme Court Justice Sonia Sotomayor, were nominated by the public and judged by a team of experts across their fields, according to the release.

Deer will be the first woman from the University of Kansas and the fifth Kansan in the hall of fame, following Amelia Earhart, Gwendolyn Brooks, Jean Kilbourne and Ruth Patrick, according to KU.

Just last week, Deer testified before Congress for the reauthorization of the Violence Against Women Act, Nicholas Syrett, the chair of KU’s women, gender and sexuality studies department, said in a university news release.

“I cannot think of anyone more deserving of this honor. We’re exceedingly lucky to have her here at KU,” Syrett said.