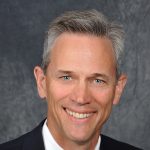 The Unviersity of Kansas selected Ronald Ragan, a former faculty member and KU alumnus, to serve as the next School of Pharmacy dean. He takes over the position on Aug. 1, 2019.

The University of Kansas selected a former faculty member and university alumnus to lead its School of Pharmacy.

Ronald Ragan, who served in several positions at KU from 1997 to 2012, will return to the university on Aug. 1 to become the new dean of the school, according to a KU news release. Ragan replaces Kenneth Audus, who served in the position for 15 years.

Ragan received his bachelor’s, master’s and doctoral degrees from KU. He currently serves as a dean at High Point University in North Carolina and is a licensed pharmacist in both Kansas and North Carolina.

Ragan is the founding dean of the High Point University’s School of Pharmacy, which began operating in 2012. As the founding dean, Ragan oversaw development of the relatively new program, which now enrolls 189 students. He also helped design the $120 million facility that opened in 2017.

“Ron has an exceptional track record of success in his endeavors and programs, both at KU and at High Point,” said KU interim provost Carl Lejuez. “I appreciate his insight into the changing environments for pharmacy practice and pharmaceutical research, and I believe he will be an outstanding leader of the School of Pharmacy.”

Ragan began his academic career as an adjunct professor for the KU pharmacy school in 1997. He later served as the school’s associate dean for academic affairs from 2004 to 2012.

“I am proud to be a graduate of both the clinical program and the graduate program at KU and am honored to be returning to my alma mater as the eighth dean in the 134-year history of the school,” Ragan said in the news release. “There are great opportunities ahead, and this is the ideal time to return to Kansas and build on the success the school has enjoyed over the years.”