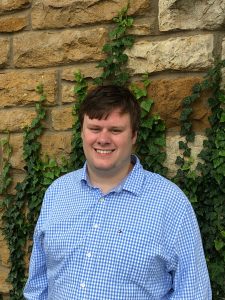 Anti-tobacco campaigns can be effective without being realistic, University of Kansas student Jacob Justice explained in a paper that recently won an international essay competition.

Justice, a KU doctoral candidate from Michigan who is focusing on communication studies, wrote about how the United States Food and Drug Administration’s “The Real Cost” campaign effectively used surreal dramatizations to reach its adolescent audience.

He entered the essay in an annual contest held by the Association for Informal Logic & Critical Thinking (AILACT), and in early December, he was informed that he won the competition, which came with a $700 prize.

Justice said he “felt good about the paper but wasn’t really expecting to win,” and that he was “pleasantly surprised” when he did.

In his essay, Justice explained how previous campaigns — like the Centers for Disease Control and Prevention’s “Tips From Former Smokers” — were realistic and graphic, meant to “shock” smokers into quitting.

“The contrast with The Real Cost messages, which feature surreal dramatizations depicting cigarettes as alien monsters or miniature bullies, is striking,” Justice wrote.

He explained that the campaign effectively discourages smoking by appealing to the value of independence. The depictions of health problems or death in other campaigns don’t faze many adolescents, who have an “it won’t happen to me” mindset, he wrote.

Justice wrote that many of the surreal advertisements share a similar message of a teenage protagonist being separated from friends by an oppressive bully: cigarettes.

Don’t Let Cigarettes Control You | The Real Cost of Cigarettes

Justice said he became interested in the topic after seeing a shocking anti-tobacco campaign on TV and then reading up on the subject of anti-tobacco messaging.

“Tobacco usage is actually the leading cause of preventable death,” he said. “Researching ways to make our anti-tobacco messaging more effective is very important.”

The essay Justice submitted to the contest was a chapter of his master’s thesis condensed down to a journal-length article.

AILACT, which conducts the essay contest, is an organization that promotes research, teaching and testing of informal logic and critical thinking. It was established in 1983, and its members span a number of countries on multiple continents.

The organization also has some connections close to home.

Donald Hatcher, a philosophy professor at Baker University, has been treasurer of the organization for more than 30 years.

“It’s just an odd thing that I’m the treasurer and some student in Lawrence, Kansas, won the prize. It’s unusual,” Hatcher said.

Not only is it unusual that this year’s winner is local, Hatcher said, but it’s also unusual that he’s still a student. Most winners of the essay contest are professors, Hatcher said. This year, 14 essays were submitted to the contest.

Derek Allen, a former president of AILACT and the current essay prize administrator, said the essay contest jury does not comment publicly on the winning essay.

“(Never) in the 15 years in which the prize has been offered and a winner chosen has the jury made public its reasons for its decision,” Allen said in an email. “I say ‘and a winner chosen’ because there have been years (2008, 2015, 2018) in which none of the submissions was considered good enough to merit the prize.”

Justice’s essay can be found on AILACT’s website. It has also been published in the journal Argumentation and Advocacy.

Justice hopes to receive his doctoral degree this spring. His current research investigates why certain arguments or narratives that lack evidence often prove more persuasive to the public than ones that are well-reasoned.