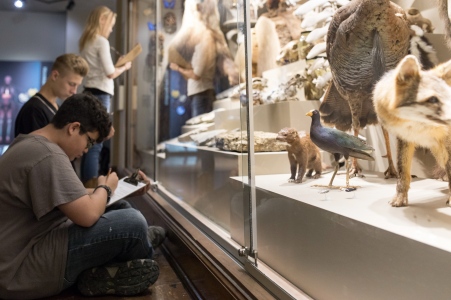 Using a discovery guide, visitors to the KU Natural History Museum explore details of the biodiversity case exhibit on the museum’s sixth floor.

Read it this way: Opossums are good at playing dead and smell really bad.

Now, read it this way:

“Lying on the ground just ahead

Not moving, not even my head

My smell just gets grosser

At the University of Kansas Natural History Museum, science exploration takes on many forms. The museum features fossils, live insects, snakes and lizards, and a natural history diorama that dates to the 1893 World’s Fair. Using the museum’s discovery guides, visitors can uncover these exhibits via poetry, scavenger hunts and, in some cases, adult-only content.

“Some of (the discovery guides) are more targeted for younger folks,” said museum outreach and engagement coordinator Eleanor Gardner. “But honestly, anybody can have a good time.”

Gardner said the museum, which opened in 1903, has had discovery guides for at least the last decade, but that they do get updated — especially as exhibits change.

Currently, the museum offers multiple scavenger hunt guides, such as ones titled “Inspect and Detect” and “Explore and Discover,” as well as discovery guides written in poetry, such as limericks and haiku. There is also a “Seussisms” discovery guide:

“You see families come in, and they’ll do them over and over again,” Gardner said, or they’ll change it up, using the discovery guide “Inspect and Detect” one weekend and “Sneak a Peek” the next, for instance, “to change it up a little bit.”

But not all the discovery guides are family-friendly.

“We have two different guides that are targeted for 18-plus because they are related to sexual activity in the animal kingdom,” Gardner said. “They include information about how different animals engage in sexual activity. It covers things from behavior to what the actual genitalia looks like.”

These guides are called “Sexy Science” and — its “extended sequel” — “Sexier Science.”

“Look around at the diversity of North American plants on display. Do you feel sexy?” one guide asks.

Apparently, some people think that’s what is supposed to happen, claiming that plants are an aphrodisiac for humans. But there’s little evidence to support that claim, the “Sexy Science” discovery guide teaches its users. (There is evidence that sage increases sexual behavior in rats, however. “Spicy!” the guide states.)

“It utilizes a lot of funny phrases and as you go along doing those particular ones you become more comfortable with it,” she said.

The Natural History Museum is open from 9 a.m. to 5 p.m. Tuesdays through Saturdays and from noon to 4 p.m. Sundays. It will be closed on New Year’s Day. Admission is contribution-based.