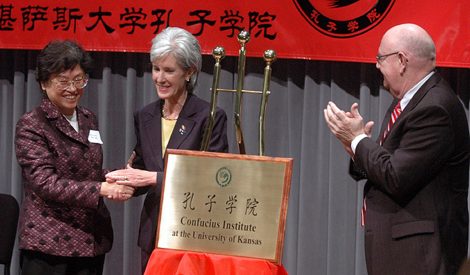 In this file photo from May 2006, Kansas Gov. Kathleen Sebelius shakes the hand of Wu Qidi, vice minister in China's Ministry of Education, while University of Kansas Chancellor Robert Hemenway applauds during opening ceremonies for the Confucius Institute at KU's Edwards Campus in Overland Park.

The controversial Confucius Institute will close in January of 2020, according to an email distributed Monday night to faculty and staff from University of Kansas interim Provost Carl Lejuez.

KU will close its institute because of a 2018 law that restricts Department of Defense funds to universities that host Confucius Institutes.

Lejuez wrote that the Confucius Institute is not a necessary component of KU’s engagement with China and that KU will continue its academic commitments in China.

“The university remains fundamentally committed to this work and believes that strong engagement with China is critical to U.S. higher education and to our mission to serve the state,” Lejuez wrote. “However a Confucius Institute is not a necessary component for KU to productively engage with China, support collaborative faculty research, and prepare students.”

The Confucius Institute provided Chinese language instruction and cultural enrichment to K-12 schools and businesses across the state, as well as coordinated cultural events for the public.

• Feb. 25 — Confucius Institutes, like one at KU, coming under federal scrutiny

In 2018, however, Confucius Institutes nationwide came under scrutiny by Republican Sen. Marco Rubio, of Florida, and FBI Director Christopher Wray, who argued that the organizations are propaganda tools of the Chinese Communist Party.

Wray went so far as to suggest the institutes may be engaged in espionage. “They’re exploiting the very open research and development environment that we have, which we all revere. But they’re taking advantage of it,” he said, according to a report by the Washington Post.

KU’s Confucius Institute opened in 2006. It was established in part by Central China Normal University (CCNU) and the Office of Chinese Language Council International, also known as Hanban. Hanban provides partial funding for the institute.

The American Association of University Professors wrote that Confucius Institutes “function as an arm of the Chinese state and are allowed to ignore academic freedom.”

“Their academic activities are under the supervision of Hanban, a Chinese state agency which is chaired by a member of the Politburo and the vice-premier of the People’s Republic of China,” the report states. “Most agreements establishing Confucius Institutes feature nondisclosure clauses and unacceptable concessions to the political aims and practices of the government of China. Specifically, North American universities permit Confucius Institutes to advance a state agenda in the recruitment and control of academic staff, in the choice of curriculum, and in the restriction of debate.”

Last year, the Journal-World reported that KU spokesman Joe Monaco said KU’s Confucius Institute is managed and controlled by American professional staff of the University. He also said funding from the Chinese government is not used to pay the salaries of the institute’s staff and that the Chinese government has no role in hiring or supervising the staff.

The teaching faculty and visiting scholars do come from CCNU, however, the Journal-World reported the institute’s website as stating in February of 2018. Currently, the website does not list any information under its “instructors” tab.

In his email, Lejuez said KU will continue its Mandarin Chinese language programs for K-12 students in Kansas through the academic year. He also wrote that KU’s agreement with CCNU will not be affected by the closing of the Institute.

“KU’s relationship with CCNU remains strong, just as our other partnerships with Chinese institutions continue to expand and become more profound,” he wrote.

Lejuez noted the “exceptional” work that has been done by the executive director of the Confucius Institute, Sheree Willis.

In an email to the Journal-World, Willis said she has enjoyed her work with the institute.

“I remain personally committed to doing everything that I can to ensure that young people in our state have access to education in Chinese language and culture and, as a loyal Jayhawk, to supporting the University’s ongoing engagement with China,” she wrote.