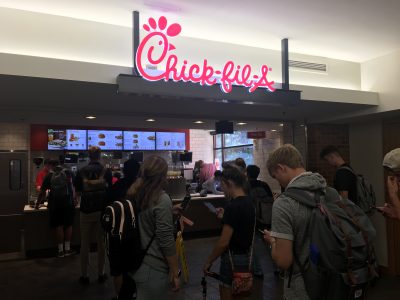 The new Chick-fil-A location on the University of Kansas campus is pictured Wednesday, Aug. 28, 2019, on the third floor of Kansas Union.

Some University of Kansas professors are urging a boycott of the campus Chick-fil-A in response to what they consider a “deepened relationship” between the university and the fast-food organization, which has had a history of anti-LGBTQ stances.

This year, Chick-fil-A’s campus location has moved from The Underground dining area at Wescoe Hall to the Kansas Union, which KU associate professor Katie Batza said places it in a more prominent location, a busy thoroughfare for students and visitors alike. The restaurant’s options have also been expanded since the move, becoming a full-service stand as opposed to the previous grab-and-go option.

KU Athletics will also be initiating a new “Chick-fil-A Coin Toss” at the beginning of every home football game this season. In past years, Chick-fil-A menu items have been served in areas of KU’s stadium on game days.

In an open letter, members of KU’s Sexuality and Gender Diversity Faculty and Staff Council, led by Batza, bemoaned the university’s relationship with Chick-fil-A because of the company’s documented support of organizations that the council deemed hostile to LGBTQ communities, calling the restaurant “a bastion of bigotry.”

Batza, who teaches in KU’s Department of Women, Gender, and Sexuality Studies, said that the university had been doing great work on diversity and inclusion, but that “this destroys a lot of that work or at least lends a lot of distrust to it.”

In a 2012 interview, Chick-fil-A CEO Dan Cathy was quoted as saying he supports “the biblical definition of the family unit.” This prompted a LGBTQ “kiss-in” response, where members of the LGBTQ community went to Chick-fil-A restaurants across the country and photographed themselves kissing their partners.

In their open letter, the Sexuality and Gender Diversity Faculty and Staff Council specifically noted Chick-fil-A’s history of donating to “anti-LGBTQ” groups such as Exodus International, which used to support conversion therapy.

Chick-fil-A did not immediately respond to request for comment.

In a summer update to faculty and staff, Interim Provost Carl Lejuez addressed the unrest surrounding the restaurant, stating that the move to the Kansas Union was financially more feasible for the university, which had been working to make $20 million in budget cuts during the past year.

“Now five years into a 10-year contract, KU was contractually required to provide updates this summer that would have cost more than $3 million to implement in the Underground, but instead could be achieved for less than $500,000 with the move to the Kansas Union,” Lejuez wrote.

Lejuez noted that the move does not signify a new contract with the organization.

“Moving forward, I believe it is important to have thoughtful discussion and deliberation when we enter into contracts,” he wrote. “In the future, we will do so in a manner that is transparent and informed by our commitment to affirm diversity and to be a welcoming and inclusive campus.”

Shawn Alexander, president of KU’s Faculty Senate and a professor in African and African-American Studies, said he stands in solidarity with the council and said that the university “chose profit over people and the concerns of students, faculty, and staff.”

“KU, like many other institutions in the country, do a lot of lip service on these issues. But it seems oftentimes we fail when it really matters. And I think this is an example of that,” he said.

Just this week at Duke University, the student government issued a statement expressing its distaste for that university’s affiliation with the restaurant in its football home opener “Chick-fil-A Kickoff Game.”

KU Athletics did not immediately respond to requests for comment about concerns regarding the “Chick-fil-A Coin Toss.”

Batza, a member of the LGBTQ community herself, called the coin toss sponsorship “a slap in the face.”

“Amidst the backdrop of this contentious move, that’s when KU Athletics went ahead and deepened this relationship with a coin toss,” she said.

Batza hopes that efforts to push back against Chick-fil-A will result in KU not renewing the chain’s contract in 2024.

At the Kansas Union on Wednesday, sophomores Sarah Hazelton and Kaleb Wood waited outside the Chick-fil-A alongside about a dozen other students. Both said they preferred the Wescoe location, as it was closer to their classes, but they also appreciate having a full menu now.

They added that while they support the LGBTQ community, it won’t stop them from eating at the campus Chick-fil-A.

“You go to wherever the line is shorter,” Wood said. “You got to get lunch.”