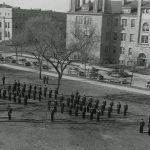 The University of Kansas Army ROTC stand in formation on campus in a grassy field sometime during the 1940s. KU's Bailey Hall (center-right) and Strong Hall (left) can be seen in the background.

In the early morning hours on the University of Kansas campus, students in military fatigues can often be found running and working out.

Those students are preparing to serve as leaders of tomorrow’s U.S. Army, and as of 2019 they’ve been doing it at KU for 100 years, said Lt. Col. Tracey Olson, who is a professor of military science and leader of the Reserve Officer Training Corps at KU.

Many alumni of KU’s ROTC were expected to return to Lawrence this past weekend to reminisce on their involvement and celebrate the centennial by attending a formal military ball that was held on Friday. Olson said former students who served in the Army as far back as the Vietnam War were expected to make the trip back.

“Being here and understanding how little or how much the university (community) knows about us, I’m excited to share that with them,” Olson said.

Although the program’s official anniversary is in September, KU Army ROTC chose to acknowledge it this spring to make it easier for current students to celebrate near the end of the school year rather than the beginning, said Joe Midgley, admissions and scholarship director for the KU program.

The U.S. Army originally created ROTC in 1916, but because the country joined the fight in World War I a year later, the program was put on hold, Midgley said.

Instead, the Army created the Student Army Training Corps, which trained students to become officers before they joined to help the fight in Europe. But when the war ended in 1919, the SATC disbanded after only about a year on campus.

Later that year, in September 1919, the Army went back to the ROTC program and officially established an engineer and coastal artillery unit.

“I figure in the middle of Kansas that was kind of weird being coastal artillery,” Midgley said. “But when you think about it we had a ton of land to shoot stuff.” 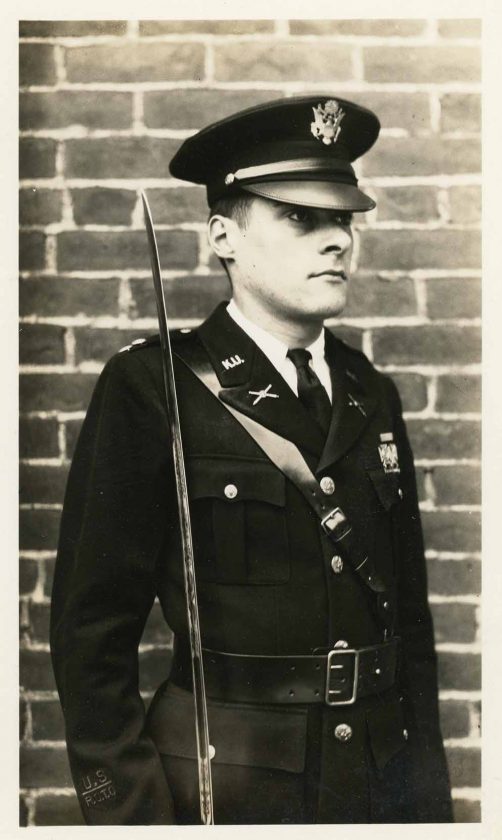 In the program’s early years, students who participated were training to go into the engineer or coastal artillery units in the Army. As the years went on, the Army realized it didn’t need to limit where the graduates could be placed, and recent graduates could be stationed in any part of the Army, Midgley said.

But after 100 years, the program still has the same goal: train students to become military leaders.

The program focuses on teaching cadets to understand mission command and how to accomplish missions. They also need to learn adaptability and flexibility, because missions do not always work out as planned.

Additionally, the cadets need to lead by example, which is why students will often see the ROTC cadets training on campus in the morning, Olson said.

“We need to look like soldiers, being physically fit,” Olson said of the cadets. “We need (cadets) to be able to mentor and coach their soldiers to be mentally and physically fit. You can’t tell them to be physically fit if you are not in tiptop condition, because they look up to you.”

In recent years, the program has enrolled about 90 students annually, Midgley said. The students will study standard programs at KU, but they will take an additional military science course along with their normal studies.

Although the program imitates some aspects of military academies — such as the U.S. Military Academy at West Point, N.Y. — Midgley said the ROTC allowed cadets to also get a taste of the college experience before deciding to commit to the military. But once the cadets reach their junior year at KU, they must contract to serve as officers in the U.S. Army upon graduation. Otherwise, they leave the program and finish their college careers as civilians.

Olson, who has been stationed at the university since 2016, said she’s aware many other students are not well educated on what ROTC is or does on campus. But the program has a lot to be proud of. In 2018, of the 6,000 cadets who graduated, KU had the No. 4 and No. 6 academically ranked graduates.

“I think that’s a pretty big deal,” Olson said. “We’ve got a great program with high-caliber cadets that are very competitive nationally.”

Olson — who asked for an extension to serve at the university until the summer of 2020 — said she loves how the program operates now and hopes it continues for another 100 years and beyond.

“It’s a really rewarding job, and that’s why I asked for the extension,” she said. “I think it’s great.”