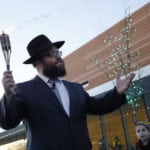 A prominent Jewish culture magazine recently honored a Lawrence rabbi for his work with the University of Kansas community.

The Forward magazine named Rabbi Zalman Tiechtel as one of the magazine’s 50 most influential American Jews in 2018. Tiechtel and his wife, Nechama, have led Chabad of KU, a campus Jewish community, since 2006.

The magazine selected Tiechtel for the honor because of his work to help make Jewish life more accessible for students at KU, specifically noting his effort to make food available for Jewish students who adhere to dietary restrictions year-round.

The magazine also referenced Chabad of KU’s work to spread goodness through sharing “good cards” on campus, which remind people to do good deeds when they find the cards.

“These many talented people who are part of the success of KU Chabad are all building the Jewish future, together,” he said in a news release. “Young people from across the nation choose KU for their education, and the Chabad Center at KU contributes to their journeys as adults and as Jews. Our successes matter to them and to all of the Jewish people.”