From $20M budget cuts to a Magic 8-Ball, a look at KU’s interim provost 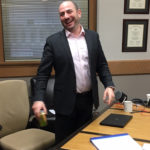 Interim Provost Carl Lejuez stands up in his office in Strong Hall before heading off to his next meeting of the day on Nov. 5, 2018.

Walking into Strong Hall at 7:30 a.m. on a dark November morning, Carl Lejuez had already finished one of the back-to-back meetings that fill his day.

For decades, he thought of himself as a night person, even scheduling the classes he taught for later in the day. But moving to Kansas from the east coast in 2016 – first to serve as dean of KU’s College of Liberal Arts and Sciences, and now as the university’s interim provost and executive vice-chancellor – the alarm starts ringing at 4 a.m.

Those who are not connected with a university system may not be familiar with a provost and what the job entails. Lejuez is only the seventh person to serve in this position and is the third interim since KU moved from the vice chancellor model to creating a provost/executive vice chancellor position in 1996. David Shulenburger served for 10 years as the first provost.

“I was surprised when the chancellor chose me,” Lejuez said. He had only served two years and two days as dean after about 15 years at the University of Maryland, where he served as a professor of psychology and an associate dean. What he appreciated was that the chancellor told him his title was interim, but he wanted him to act like the provost.

There are several definitions for provost, according to Linda Luckey, chief of staff to Lejuez. She was made aware of that fact on a walk while visiting London. She saw a “provost” sign on a cottage. Knocking on the door she discovered that particular provost was a groundskeeper. A provost can also be a prison warden, and in Scotland, it’s the name for the mayor of a village, Luckey said.

“One placed before,” Luckey said, is one of the definitions.

At KU, Lejuez is second in command on campus. He serves at the pleasure of the chancellor, making sure the administrative and support operations run on a daily basis.

“The chancellor sets the vision, and the provost executes that vision,” Lejuez said. “I’m not doing my job if I am not executing the will of the chancellor.” 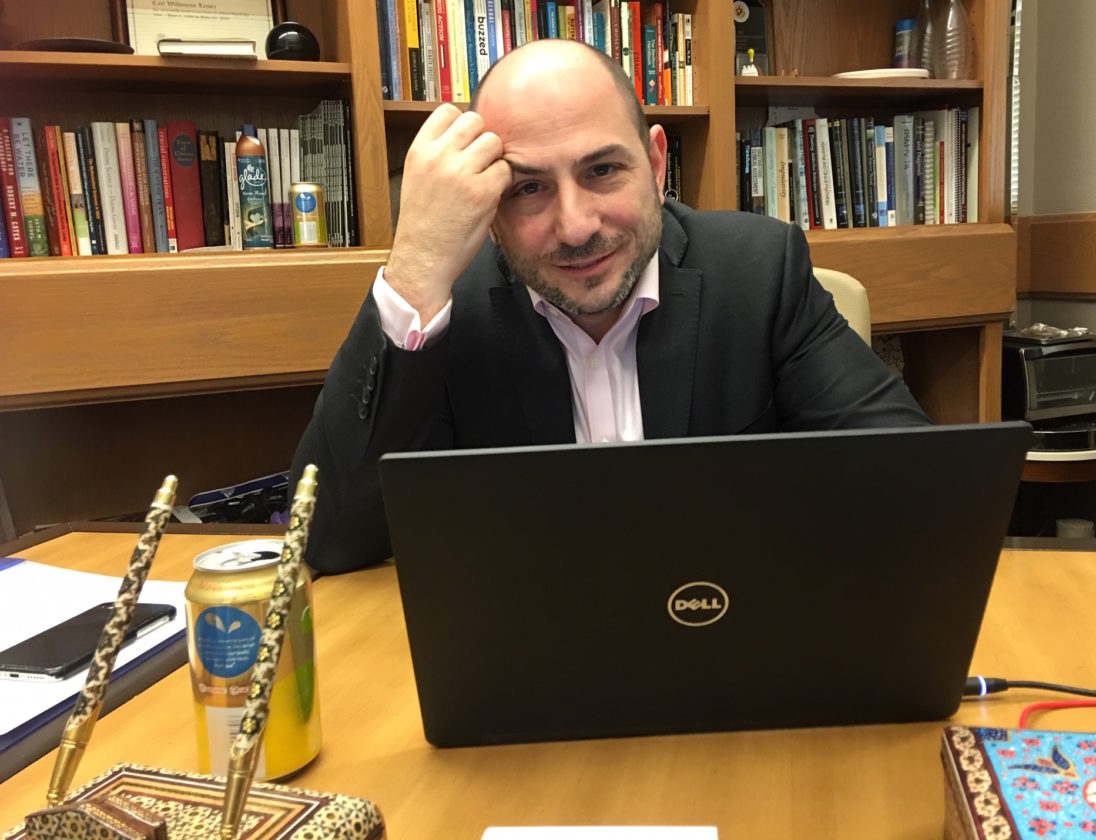 Interim Provost at the University of Kansas, Carl Lejuez sits in his office in Strong Hall on Nov. 5, 2018.

Throughout a typical day, Lejuez switches gears from one-on-one meetings with deans to talking with Student Senate leaders to discussing ideas with the university’s degree level assessment committee to giving the opening remarks at an evening event on campus.

Technically, he oversees almost 12,000 people, which include faculty, staff, administrators and other employees. Luckey said that includes all of the operations, facilities, deans, faculty, staff that report to the academic units and academic support units, student affairs and undergraduate studies.

“If someone invites him to bingo he goes,” Luckey said. “He finds time for everybody, whether it’s the chancellor or the custodian. He sees everybody here as part of the same enterprise.”

Less than a week into the new position, Lejuez began studying the budget and very quickly became convinced the university was in a crisis. With the approval from the chancellor and the budget office, there needed to be a $20 million budget cut to get finances in line.

Over the past six months, this has become a huge focus for Lejuez. He spends a lot of his time meeting with faculty and staff on ways they can make the necessary cuts to their budgets. He has been hosting monthly town hall meetings to answer questions from frustrated faculty, students and staff worried about how the cuts will affect them. He says he wants to provide full transparency regarding the details of the cuts and the budget.

One thing Lejuez is not, Luckey said, is a placeholder.

When faced with the budget cuts, “he handled it like the researcher he is trained to be,” Luckey said.

“He’s a learner, so in the past six months he learned more about the budget and budget models than some people ever learn being provost,” said Luckey, who has worked with six provosts.

In August, Girod announced in a message to the university that he wanted Lejuez to stay on as interim into 2019, citing his administrative and leadership skills.

“Carl has done terrific work amid challenging circumstances, which includes identifying budget concerns and leading our strategy to align spending with priorities to support core activities,” Girod said in his message. He plans to engage an executive search firm and launch a nationwide search for a permanent provost and executive vice chancellor in the late spring of 2019.

Meanwhile, Lejuez spends his day meeting with people; among them on a recent day was Ann Brill, dean of the School of Journalism and Mass Communications. She was there for her monthly meeting giving Lejuez an update on the school, including plans for some remodeling. Lejuez pointed out that part of the expense for fixing up the building was coming from deferred maintenance funding from the university.

“Essentially, they are getting things up to a reasonable standard,” Lejuez said. However, a new entryway would be paid by fundraising done through the school.

After the meeting, Brill said the only reason she feels she is working with an interim provost is that Lejuez reminds her of that fact. 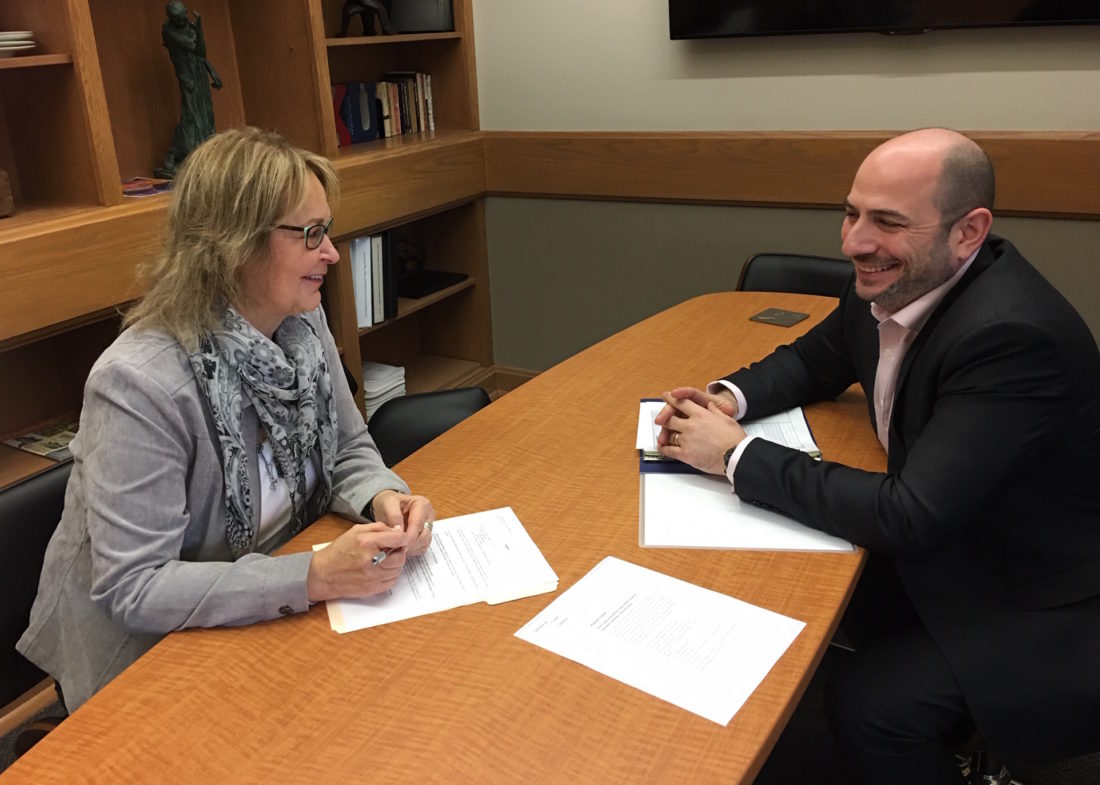 “Carl is doing an amazing job and I trust him to see us through this (budget cuts),” she said. “It’s clear he has the chancellor’s support and Doug is here for the long haul, so we know these budget changes will be with us for a long time.”

A Magic 8-Ball for Mom

The provost’s small corner office can be reached by following a long hall through the chancellor’s suite of offices on the second floor of Strong Hall.

On his bookshelf sits a Magic 8-Ball. He doesn’t use it to predict the future. It’s on the shelf because it reminds him of his mother, Philomena Lejuez, who was a psychic.

For most of her life, she worked in the business office of a paint factory in New Jersey. But she would bring her tarot cards and crystal ball to special events where people would line up to have their fortune told. Philomena died after Lejuez became dean and he and his wife, Sara, had moved to Kansas.

On the office wall is a large whiteboard with three lists in various levels of importance. Words such as greek life, supervisors training, old evaluations, new evaluations and compliance reports are listed.

The whiteboard makes the job a lot easier and helps Lejuez avoid fires. It includes a list of broader topics he wants to address proactively rather than running around aimlessly. Although he likes things to be orderly and make sense, the whiteboard’s ordering isn’t by importance — just by what comes first to his mind.

“In some ways, I’m working on all of them at once but may focus more on one thing over another based on importance at that moment or how close it is to being resolved,” he said.

Something he learned since taking on the role of provost: Everything is the provost’s responsibility.

“If something goes wrong, there is probably something I could have done better,” he said.

When it comes to his work, he prefers not to talk about how many hours he puts in each day. He says it’s his choice to come in at 6 a.m. and stay for 12 to 14 hours.

Sometimes when he is working late, he runs into Bob Bennett, the night custodian. They have become friends and when they don’t see each other, they leave notes. He appreciates having a sense of everyone who works in the building.

Despite having access to the Magic 8-Ball, Lejuez’s future is unknown. But he said he is comfortable with change and uncertainty.

“My next step is getting through the budget challenges and creating a budget model that is fair and thoughtful and prepares us for the future,” he said.

When the time comes to hire the next provost, Lejuez said his greatest concern is that KU gets the right person for the job.

Does he hope to be that person?

“I am enjoying this job,” he said. “As long as I have something to contribute in this role, I would like to continue doing it.”

But if he isn’t selected, he says the past year will not have been in vain.

“I always want to feel I have left a place better than it was,” he said.